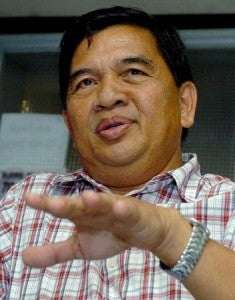 MANILA, Philippines—Moro National Liberation Front (MNLF) chair and former Cotabato City Mayor Muslimin Sema has asked the Sandiganbayan to lift the hold departure order it had issued against him in connection with a graft case so he could travel to Saudi Arabia to perform the Hajj or pilgrimage required of Muslims.

In a motion filed by his lawyer in the antigraft court’s Third Division, Sema sought the issuance of a permit to travel so he could comply with the religious edict in order to become “a true and complete Muslim.”

Sema wants to travel to the Masjid al-Haram (Holy Mosque) in Makkah Al-Mukarramah, Saudi Arabia, to perform the obligatory Hajj, one of the five pillars of Islam, the others being the Shahadah, Salah, Saum and Zakat.

This is not the first time, however, that Sema, who is out on bail, has asked the antigraft court to be allowed to travel. Twice before, the court allowed him to travel abroad.

The first time was to fly to Bogor, West Java, to attend a meeting between leaders of the MNLF and the Moro Islamic Liberation Front, which was aimed at encouraging both groups to converge on a united position for peace in Mindanao.

After the meeting, Sema said he immediately returned to the country and complied with all the requirements of the court.

The second time, Sema was allowed to travel to Saudi Arabia to perform the Umrah, or pilgrimage to Mecca, from July 14 to Aug. 9 this year. The Umrah is a “lesser pilgrimage” and is not compulsory unlike the Hajj. Both pilgrimages may be combined or taken separately.

Sema said he had to return to Saudi Arabia for the Hajj, giving his itinerary and the places where he will stay.

As required in all Hajj proceedings, a sheik is appointed by the National Commission for Muslim Filipinos for each group of pilgrims. In the case of Sema and his group, this will be Ustadz Ishaq Dasil Ebrahim.

Sema is a leader of one of the three factions of the MNLF. One faction, led by MNLF founder Nur Misuari, has been engaged in a two-week battle with government forces in Zamboanga City.