Teaching history to Fil-Ams through murals 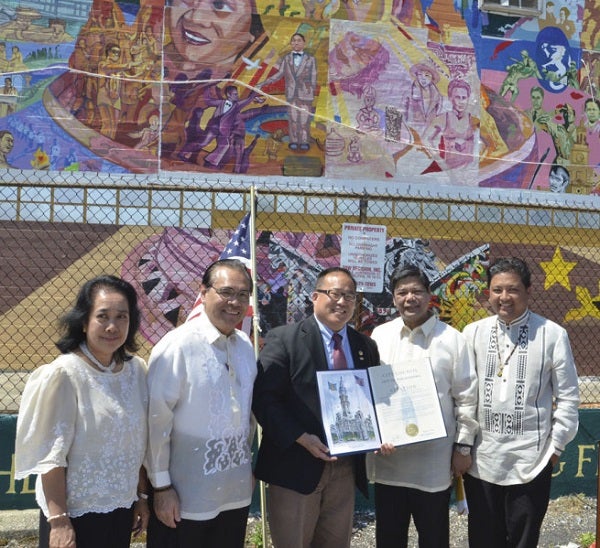 Artist Eliseo Silva is first from the right.

Something magical happened when Filipino-American muralist Eliseo Silva placed the first brush strokes on the Filipino mural in Historic Filipinotown back in 1995.

“I felt a spark inside me,” Silva said to Asian Journal. “It was like something supernatural was coming over me.”

From coast to coast, the history of the Philippines and Filipino-Americans is alive and well and for everyone to see.

Fil-Am muralist 41-year-old Silva’s artistic ability has made this happen.

Silva’s work is well-known in Los Angeles. In 1995, at the age of 22, he created the largest Filipino-American mural in the US called “Gintong Kasaysayan, Gintong Pamana” (or Filipino Americans: A Glorious History, A Golden Legacy.)

The 25-foot high, 150-foot long mural in Historic Filipinotown commemorates the Centennial of the Philippine Revolution against Spain and depicts several Filipino-American heroes.

This past July, he created a similar mural (albeit a tad smaller) in Northeast Philadelphia.

Fire in the heart

Commissioned by the Filipino American Association of Philadelphia, Inc. (FAAPI), the mural titled “Alab ng Puso” (or “My Heart’s Sole Burning Fire”) depicts the Filipinos that died in the 1898 War of Philippine Independence, other Filipino heroes of the past and present, and Filipino youths in Philadelphia.

“It is a beautiful mural,” Dr. Rommell Rivera, president of FAAPI, told Asian Journal. “This is a great way for us to promote and share our history in the city of Brotherly Love and the city of Murals.”

Standing 22 feet high and 65 feet across, it is the first Filipino-American mural in the East Coast, said Rivera. The mural was unveiled in July but is set to be fully completed in October, in time for the celebration of Filipino-American history month, said Silva.

Silva in an interview with the Asian Arts Initiative said his murals inspiration comes from the depths of his heart.

“When I make murals, I reach down deep inside and try to find out what it is that I want to say in one sentence,” Silva said.

“Even if it’s the stupidest thing, it has to be that. And then it has to come out of my design, and the way I design it. It cannot be just putting together a collage of images. It has to come from something deeper within-there has to be some sort of purpose.”

“It has to be purposeful and objective,” Silva added. “All of these things really for me are about trying to spark the imagination of the young people. The ones that need this the most are the young people. And if art could make them connect, or make them participate in something that is bold, dynamic and brave.”

That is exactly the same sentiment Rivera said he wanted from Silva when the FAAPI commissioned the Corona-based artist for the mural.

“This mural is for the future, the next generation of Filipino-Americans, so they can see where their history and where they came from,” Rivera said.

Silva narrated to Asian Journal that started drawing at an early age. His parents operated a bakery, and while they worked he would draw on his spare time.

He would draw mostly portraits of his parents and other works on Manila paper, before displaying them on the bakery’s walls.

Silva said some of his first paintings were sold at the bakery. He continued his artistic venture on chalkboards in elementary school in Alabang in the Philippines.

To Silva, creating murals is the best form of storytelling. He’s completed more than a hundred in his life.

“That’s what Diego Rivera did when he painted murals,” Silva said to Asian Journal. “He brought the Aztec civilization and their kingdom back to life. It is a strong visual and cultural foundation.”

Silva doesn’t have the same stature as Rivera but he aims to do the same thing the Mexican painter but this for the Filipino-American community.

Bringing history to the street

“There are not a lot of Filipino artists painting murals,” Silva said. “To make history you have to bring it to the streets and find a way to connect to the neighborhoods.”

Silva recalls when he created the mural in Historic Filipinotown in 1995. He said there were some members of the Filipino community who criticized him for including farm-worker activists, Philip Vera Cruz and Larry Itliong.

“Back then nobody knew who they were,” Silva said, adding that most people only remember Cesar Chavez during that time.

“But now everyone knows who Vera Cruz and Itliong are. We have to control our history. For too long, we’ve had others determine what our history was. We have to take control of it.”

Silva advises other young Filipinos thinking about pursuing a career in arts to “read and not just look at one perspective.”

“Know yourself first and know what you want and be true to yourself,” he said. “Once you find a purpose go for it. Find a voice. When I did that first mural in Los Angeles, I found a voice because I was listening to the whispers of my ancestors.”