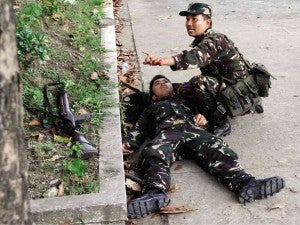 WOUNDED SOLDIER A government trooper tends to a comrade who was wounded by mortar fire on the fifth day of the standoff between government forces and Moro rebels in Zamboanga City on Friday. EDWIN BACASMAS/INQUIRER FILE PHOTO

ZAMBOANGA CITY, Philippines—Claiming it had received reports of torture of suspected Moro National Liberation Front (MNLF) gunmen, even the elderly, by state security forces, the New York-based Human Rights Watch (HRW) on Friday called on the Philippine government to investigate “when the smoke finally clears in Zamboanga.”

But while expressing alarm over the “mistreatment” of prisoners by government security forces, Brad Adams, HRW Asia director, also decried the MNLF gunmen for equally committing “serious abuses during the fighting.”

In an e-mailed statement, Adams noted that after taking over five coastal villages on Sept. 9, the Moro rebels from the MNLF faction led by Nur Misuari took scores of residents hostage. He observed, however, that “many have since been released.”

Adams said the “taking of hostages” and “cruel treatment” by all parties to a conflict is specifically prohibited by international law.

“Customary international law also prohibits deliberate attacks on civilians, attacks that do not discriminate between civilians and combatants, and attacks in which the anticipated harm to civilians is greater than the expected military gain,” he said.

The use of “human shields” is a serious violation of international law, Adams said.

But he found lamentable military attacks “in disregard of the civilians who have been placed at risk.”

On claims of torture by security forces, Adams said HRW workers had interviewed six suspected MNLF members detained at the Zamboanga Central Police Office and all of them claimed they were mistreated and abused by police or military agents and forced them to confess they were rebels.

“Five of them said police or military agents interrogated them by putting a plastic bag over their head, suffocating them. They said they were also punched and kicked by their interrogators. The suspects said their interrogators sought to force them to confess to being MNLF members,” he said.

Adams said it was also lamentable that even elderly detainees did not escape torture.

“An elderly detainee alleged that his interrogators blindfolded him and dunked his head into a toilet bowl twice. Another said alcohol was poured into his nose to get him to confess,” he said.

Adams said one of the suspects told HRW workers he was forced to admit a lot of things because he could not endure the pain anymore.

“The government will need to investigate what happened, including holding accountable members of the military and police who committed abuses,” Adams said.

The Commission on Human Rights (CHR) on Friday cautioned the police and the military against indiscriminate arrests, as they could be accused of arbitrary arrest or wrongful detention.

Arbitrary, illegal or unlawful arrest is a violation of the right to liberty and security, the CHR said.

Adams also said it appeared that government security forces were arresting anyone on sight whom they considered suspect.

“One of those arrested was a man with a mental disability who was accused of being an MNLF rebel. The police at first refused to release him or permit his family to see him, but eventually freed him without charge,” Adams said.

The CHR said it was unlawful for the authorities to pick up people on mere suspicion because “probable cause is the only legal basis to apprehend violators if the arrest is without warrant.”

Dozens of suspects, including minors, are now in the custody of security forces and undergoing “tactical interrogation.”

Adams said among the detained suspects HRW workers had seen were “two boys aged 14 and 17 handcuffed to each other since Sept. 12” at the city police station.

“They were arrested after police found a gun on one of the adults in the group. (The boys and three other men arrested with them) said they knew each other as bottled water vendors at the city port, but denied being members of the MNLF,” he said.

Adams challenged authorities to bring charges against the suspects because “under Philippine law, authorities must charge criminal suspects within 36 hours or release them.”

“Most of the rebel suspects in custody had not been charged after up to 10 days in cramped jails. Interior Secretary Mar Roxas told a media briefing on Sept. 18 that charges had not been brought because the office of the Department of Justice in Zamboanga City has been closed since the crisis began,” he said.

That is not an excuse, he added.

Adams said that if the government could not immediately bring charges against arrested suspects, it should at least “ensure that everyone taken into custody, including suspected rebels, are treated humanely.”