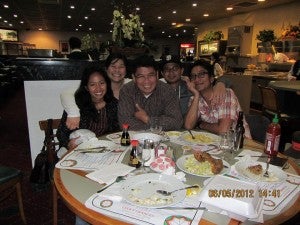 SAN FRANCISCO–Ray Garcia, a Filipino American resident of South San Francisco, remembers the suffering of his childhood friend who was dying young of brain cancer at home in Manila 35 years ago.

“We could hear him screaming in pain from a block away and like his family we couldn’t do anything for him. We could only cry helplessly.”

Palliative care could’ve have helped Garcia’s dying friend get relief and live more comfortable last days, but it was practically nonexistent in the Philippines at the time.

In the United States today, immigrants like Garcia can have access to palliative care should they need it–if they are aware of its effectiveness and availability.

Indeed, greater awareness of palliative care by Filipino Americans will be sorely needed in the coming years, judging from the rising number of elderly as well as high incidences of serious illnesses among them.

But Filipino older adults over 65, like most Asians, are less likely to enroll in hospice care, an end-of-life component of palliative care. This was the finding of a large study on the last year of life of Asian and white Medicare beneficiaries registered in the Surveillance, Epidemiology, and End Results Program.

In a related finding, the Berkeley Forum of the University of California School of Public Health said that 61 percent of Medicare deaths in California three years ago did not involve hospice care.

What is palliative care?

Palliative care is delivered by an interdisciplinary team to prevent or manage symptoms and pain from serious illness. It improves the patient’s quality of life, whether or not cure can be achieved. It is not synonymous with hospice care, which could be a component.

“Palliative care is not yet well known in general, including among Filipino immigrants,” observes Vyjeyanthi “V.J.” Periyakoil, MD, who has provided palliative care to Filipino patients, “unless they are more acculturated or have relatives in the health care industry and are therefore more familiar with it.”

Periyakoil, who directs Stanford University’s Palliative Care Education and Training Program, says the aim of the program is “to prolong life, but not (the pain and suffering accompanying) the dying process.”

“Palliative care may begin when the patient is first diagnosed with whatever kind of disease or prognosis,” Prudence Gaspar told 90 medical provider and spiritual counselor trainees in Negros Oriental, Philippines last year. Gaspar was then a social worker at San Diego Hospice in California.

It ranges, Gaspar said, “from the curative treatments, to the care where comfort and supportive treatments are given, to the time the patient is provided hospice care, and up to providing bereavement support for the family.”

Willie Briones, a San Francisco resident, knows this. His home health care service hasn’t had Filipino hospice clients, but three members of his own family died of cancer, each two years apart.

His elderly father, Gonzalo, wife, Nonie, and daughter-in-law, Dee, were stricken with leukemia, pancreatic cancer and kidney cancer respectively. So Briones has intimate knowledge of the palliative care they needed.

“It was crucial for all of them,” recalls Briones whose wife was a medical technologist and so was aware of palliative care as an option for her and her kin.

“Pain management was important, but that’s not all,” Briones says. “When you continuously take morphine to relieve the pain it begins to affect bodily functions, so oxygen for breathing, help with bodily functions, and so on, all are needed—and the professionals were there to help give that care.”

Palliative care has been among the fastest growing trends in health care in the last ten years, and access to it has improved significantly in the US, according to the Center to Advance Palliative Care.

The number of palliative care teams within US hospital settings has increased approximately 148 percent, from more than 600 in 2000 to more than 1,600 today, reported the CAPC.

Health care providers treat palliative care in the same way as medical services, like oncology, cardiology, etc. In the political debate over Obamacare, some conservatives have tried to caricature palliative care as “death panels.” Most insurance plans, including Medicare and Medicaid, cover all or part of palliative care.

But this doesn’t mean that Filipino immigrants coming to the U.S. are already familiar with palliative care as an option should they or members of their family come down with debilitating illness.

So, better awareness of palliative care is becoming imperative, because the need for it is expected to rise among the 2.6-million Filipino Americans here.

And cancer is only one of the top causes of death among elderly Filipino Americans. A Stanford Medicine report states that the top five are 1) cardiovascular disease 2) malignancy, or diseases with worsening virulence, notably cancer 3) stroke 4) chronic lower respiratory disease (COPD) and asthma 5) diabetes.

All are debilitating and often require intensive care, making palliative care all the more relevant.

In Periyakoil’s experience, initial hesitance to discuss palliative care, “especially among recently immigrated older patients,” stems from reluctance to talk about serious illness, “which is frightening to everyone regardless of background.”

Such patients’ usual response is to involve family members in decision making, particularly when it comes to making Advance Health Care Directives and Physician Orders for Life-Sustaining Treatment (POLST).

However, a “descriptive cross-sectional study” cited by Stanford Medicine found that critically ill Filipino Americans, aged 55 and older, and their family members were overall open to advance directives, especially among acculturated and highly educated families.

“Any initial hesitation to advance care planning is often resistance to a provider’s wrong way of communicating,” clarifies Periyakoil. “Providers need to be very sensitive and treat the family as a unit of care, which is different from the western mode.”

Providers, adds Periyakoil, must convey to patients that advance directives are not an imposition on them. “It is their right. They have the right to tell doctors what care they want done.”

Information is crucial to greater patient appreciation for palliative care and its components.

Once informed about palliative care, 92 percent of Americans are highly likely to consider it for themselves or their families in case of a serious illness, according to a recent study by Public Opinion Strategies.

The same proportion also said it is important that palliative care services be made available at all hospitals for patients with serious illness and their families throughout the United States.

“People must be informed that palliative care adds an extra layer of support both for the quantity and quality of life,” Periyakoil states. “That should be the message.”

With greater awareness, more Filipino Americans could become part of the 92 percent of the US public that, once informed, become receptive to palliative care for themselves and their families.