Stay out of sea disputes, China warns US | Global News

Stay out of sea disputes, China warns US 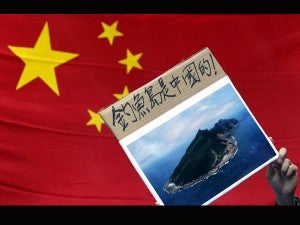 A protester demonstrating against Japan’s claim to disputed islands holds a picture of the rocky islands, known as Senkaku to Japanese and Diaoyu to Chinese, reading “Diaoyu belongs to China” in front of a Chinese national flag during a rally outside the Japanese Consulate General in Hong Kong, Tuesday, Sept. 11, 2012. AP Photo/Kin Cheung

BEIJING—Beijing has warned the United States not to support China’s neighbors’ claims to disputed islands in the East and South China Seas, the government said Friday.

Sino-Japanese ties have soured dramatically since Tokyo nationalized some of the Senkaku islands, which Beijing claims and calls the Diaoyus, in the East China Sea a year ago.

China also claims almost all of the South China Sea including waters close to its neighbors’ coasts, and tensions with the Philippines and Vietnam have intensified in recent years.

Washington has security alliances with both Tokyo and Manila, but Wang Guanzhong, a senior officer of China’s People’s Liberation Army (PLA), this week warned visiting US counterparts that it should handle issues “appropriately” to avoid damaging “mutual strategic trust.”

“The United States should maintain a consistent stance and policy, not send wrong signals that support or connive with relevant countries to act on their own initiative,” Wang said.

China’s military was determined to defend the country’s territory and maritime interests, although Beijing has exercised restraint while dealing with the disputes, he added.

Miller told Wang the US discourages any use of force but also has “treaty obligations” with some of the countries at odds with China, he said to reporters earlier this week.

“We strongly believe that any and all maritime disputes should be resolved without the threat or use of force,” he said. “For East China Sea and South China Sea, we reminded the Chinese we have treaty obligations with a number of the parties involved.”

Japan and the United States have a security treaty that requires Washington to come to Tokyo’s defense if it is attacked, and tens of thousands of American troops are stationed in the country.

The Philippines said in June it was looking to give the United States—its former colonial ruler—and Japan greater access to its military bases, as it seeks to counter what it perceives as a growing threat from China.

Fan was quoted Friday as saying the navy needs to respond immediately to threats and be capable of fighting and winning under modern conditions. Naval capabilities were vital to safeguarding China’s sovereignty, security and development interests, Fan said.

“Focus on responding to the complicated and difficult situation, grasp hold of the outstanding problems and points of weakness, accelerate advancing all forms of preparation for fighting at sea,” Fan said.

The official Xinhua news agency said Fan made the remarks Thursday during an inspection tour of a navy unit in Guangdong province, which lies on the disputed South China Sea.

China’s massive naval upgrade is seen as spurred in part by Beijing’s desire to put teeth into its claims over virtually the entire South China Sea. Beijing also recently reorganized its coast guard to streamline its command structure and is rapidly adding new ships to the force.

China’s navy has benefited greatly from China’s booming military spending, now the world’s second largest after the United States. It has commissioned its first aircraft carrier, a refurbished Russian model, and is building new destroyers, frigates and submarines.

Read Next
US Embassy issues warning for Americans in South
EDITORS' PICK
What’s in a name? ‘Maharlika’ evokes time of mythmaking
Complete your early Christmas shopping with vivo V25 Series
Indonesia raises volcano warning to highest after Semeru erupts, evacuation underway
China’s Xi unwilling to accept vaccines despite threat from protests — US intel
The vivo Y16 makes the season of giving more thoughtful for the whole family
House energy committee chair Arroyo bats for cheap electricity
MOST READ
Maxene Magalona sees separation from Rob Mananquil as ‘blessing in disguise’: ‘There’s no more anger’
What’s in a name? ‘Maharlika’ evokes time of mythmaking
Are we ready for a sovereign wealth fund?
4-story building in Malabon City collapses
Don't miss out on the latest news and information.