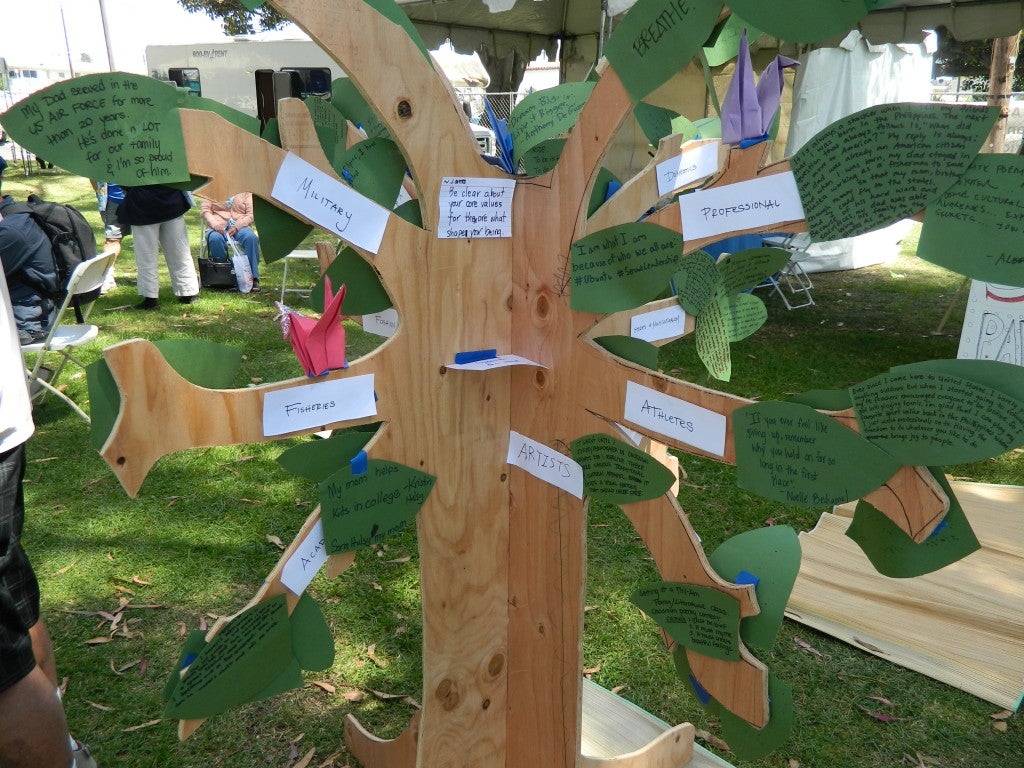 Fil-Ams could post their personal stories on the Saysay Tree. PHOTO BY ALFRED DICIOCO

SAN PEDRO, California—A mild sea breeze and breathtaking views of the Pacific Ocean from Point Fermin Park were just among the come-ons that drew a huge crowd to the 22nd Festival of Philippine Arts and Culture (FPAC) on Sept. 7 and 8.

Themed “Pag-Ugnay, Paglago at Pagbabago,” this year’s FPAC welcomed a crowd of over 20,000 and 500 artists. The beloved festival first began in 1992 to promote cultural healing after the Los Angeles “Rodney King riots.”

It has grown throughout the years, featuring some of the most talented artists, musicians, dancers, singers, poets and entrepreneurs in the Filipino American community. 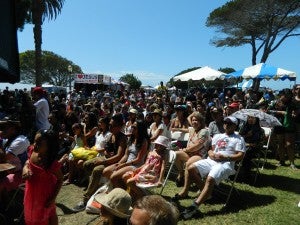 Headlining this year are the legendary 1970’s Filipino-Latin rock band Dakila, which made its first comeback appearance in Los Angeles on Sunday, after a 40-year hiatus; comedian Rex Navarrete; rapper and hip-hop artist Bambu; and the Filipino American Symphony Orchestra.

Known for songs like “Makibaka,” a protest against the Marcos regime, Dakila decided it was time to get back together as a band.

Others noted the growing visibility of Filipino-Americans in the mainstream.

“Back in the ’80s, people didn’t even know what a Filipino is. Now, everyone knows who we are,” Navarrete said during this 30-minute set on Sunday.

“I see all the singing competitions on television like ‘American Idol’ and ‘The Voice’ and every year, there is always a finalist who is Filipino. I mean, can we let someone else win?”

“The feedback that we always receive from attendees is that it’s too far,” Biscocho said. “We are looking for a location that is more central to Filipino communities.”

Some of the sites being considered for next year are Carson, downtown Los Angeles, and historic Filipinotown. 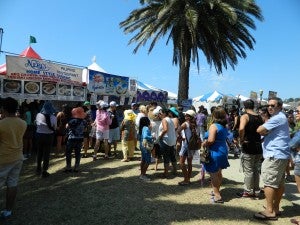 Long lines of hungry revelers to the food booths. PHOTO BY ALFRED DICIOCO

The festival this year also launched a storytelling initiative called Saysay Project to emphasize the importance of recording Filipino-American stories. After its unveiling for the first time at the Echo Park Library Community Hall on July 20, the program has perhaps become the most important addition to the events at FPAC.

At the Saysay Salon, several facilitators hosted conversations about immigration, family, identity and life as a Filipino-American.

Participants could also post random stories on the Saysay Tree according to the different Filipino-American experiences specified on “branches,” like military, athletics, multiculturalism and being  undocumented. Attendees were also welcomed in front of a camera to share personal stories to be posted online.

Carol Mannion, parent of a son who recently came out as LGBT, spoke in front of a camera to share her story of acceptance to other parents who might not be as welcoming of their children.

“Stories of first-generation parents are relevant to the experience of other Asians and Pacific Islanders,” Mannion said, “because they deal with two layers of discrimination—racism and homophobia. I want to show that we care, we support, and we love our children unconditionally.”

“I want us to be more relevant,” said Norma Requierme Austin, the co-founder of FPAC. “After all these years, where are we now? We have to tell our story now because if we don’t, who will tell it for us?”

Requierme Austin dismissed the notion that Filipinos are afraid to share their personal stories, saying that they just need a gentle push to start talking.

“Culturally, we are a timid group of people. But once we get going, we don’t know that we are already telling stories,” Austin said. 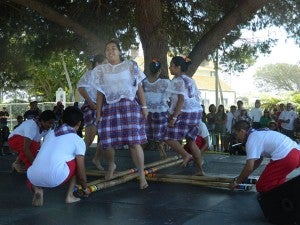 While the headliners performed at the main stage, audiences packed the so-called Generation Stage on Sunday noon to watch Filipino collegiate organizations from across Southern California at the highly anticipated 6th Annual Tinikling Battle.

Unlike typical performances at college Filipino cultural nights, the performers pulled all the stops to infuse the popular bamboo dance with contemporary elements from the Super Mario Brothers and Bruno.

The collegiate organizations also ran most of the festival as more than 400 volunteers ran logistics and helped out the booths that sold clothes and food, or promoted nonprofits and artist.

“The most positive thing I’ve seen is that the younger generation is more involved. They want to hear more about it,” Requierme-Austin said.

DJ Borja, a student from University of California Irvine, said she was more surprised at how tightly knit the Filipino community was outside of school.

“For me, it’s not that I didn’t know about culture,” Borja said, “I didn’t know how close the community was, so just seeing all these different networks of people made it seem like there are so many outlets through the arts, so I really like that aspect.”

There were also educational activities for children, like parol-making, pabitin and face painting. Seniors joined in talks on vegetable growing and harana competitions. 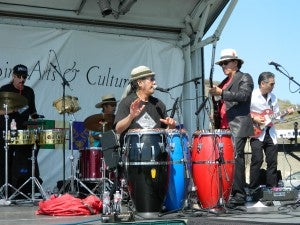