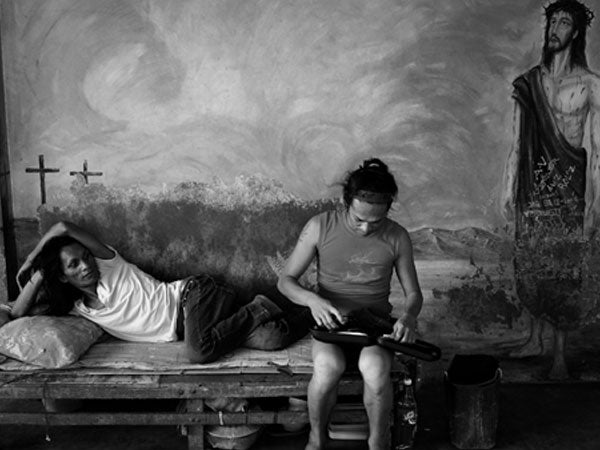 Inmates in one of the overcrowded prisons in the Philippines. PHOTO BY RICK ROCAMORA

Rocamora projected a series of images of Filipinos who are struggling against grinding poverty, a flawed justice system and pernicious discrimination.

Teenager Rodallie Mosende lives with her mother, sister and a friend on the street and helps her mother sell religious items from a sidewalk, yet she had persisted to finish high school.  Rocamora did a series, recording the life of Rodallie and her family, as they struggle to carry on their daily activities—sleeping, bathing, eating, studying and earning a living—on Paterno, a busy street in Quiapo, one of the most congested areas in Manila. The photos were widely covered by the Philippine media, moving many readers to tears, including a generous benefactor who offered Rodallie a four-year college scholarship and living expenses, giving her a chance for a better future. 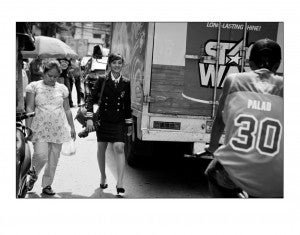 Rodallie Mosende returns from school to her family’s life on the street in Quiapo. PHOTO BY RICK ROCAMORA

Rocamora has exposed the tremendous overcrowding and horrible conditions common in many Philippine detention facilities as a result of the turtle-pace court system. In one prison, 4,000 inmates occupy space that could only accommodate 1,200.

Besides exhibiting his images of deplorable prison life at the Supreme Court and law colleges, he brought further attention to this injustice in last year’s retrospective of his work “With Passion and Purpose” at the Cultural Center of the Philippines.

His powerful black-and-white photographs also included his pieces on Mosende, the unfair treatment of aging Filipino World War II veterans in the Bay Area as they waited for recognition from the US government, the plight of Filipino Muslims crammed in a ghetto in Manila, and headshots of martial law victims, who had just received minimal compensation for human rights violations they had suffered under the Marcos dictatorship.

The declaration of martial law in the Philippines in September 1972 was the catalyst that led Rocamora to a career as a documentary photographer. Newly arrived in the Bay Area that year, he became a member of the US-based opposition against Marcos. Though he did not have any experience, he eagerly took on the role as photographer of the movement’s demonstrations, rallies and events for Ang Katipunan, a progressive newsmagazine.

This consistent reportage by activists helped educate both the American and Filipino audiences about the growing movement against the oppressive conditions and lack of democracy under Marcos. 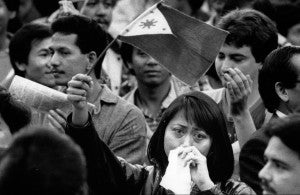 Filipinos rejoicing at the downfall of Marcos on February 25, 1986 in Union Square in San Francisco. PHOTO BY RICK ROCAMORA

By the time the Filipino community celebrated the ouster of the dictator at Union Square in San Francisco in February 1986, Rocamora was already adept at using the camera. Mirroring the strong emotions of both joy and relief expressed by his compatriots, he was uncontrollably crying while shooting several rolls of film to catch that magical moment.

A few years later, after a lot of soul-searching, he left his lucrative sales position to pursue documentary photography. Though he earned much less as a full-time photographer, he never looked back, pursuing his new career with passion and vigor but never wavering from his activism.

“I have to be personally involved in the project because I’m not just an objective photojournalist, I’m also an advocate,” Rocamora explains. His vision has inspired him to capture the struggles for freedom and human rights in different parts of the world, such as El Salvador, Nicaragua and South Africa.

Recently, he had to be escorted by heavily armed marine troops to cover a project to build schools in Jolo, an island in southwest Philippines, where Abu Sayyaf’s Islamic militants are known to operate. He admits that his work often involves risks, but he does not let danger keep him from doing his job. Nevertheless, he takes precautions by notifying someone at each place he visits regarding his whereabouts and makes use of new technology to communicate with his wife, Sharon, in the Bay Area.

Rocamora’s two decades of art and activism have won him high praise and recognition from many quarters, and he has received awards from the Asian American Journalist Association, SF Bay Area Press Photographers Association, California Arts Council and New California Media. His exhibits have been featured in major museums and galleries in the US and other countries, and his images have been published in major newspapers and online publications. He founded Exposure Gallery in San Francisco with Kim Komenich, who won a Pulitzer Prize for his photo coverage of the peaceful four-day People Power Revolution that led to the ouster of Marcos.

Yet, Rocamora also has his lighter moments. He is currently roaming San Francisco, taking images with an iPhone of residents going about their daily activities, which he hopes to publish as a book. By using a digital device, he wanted to prove that he could portray humanity just as effectively as when using a regular camera. Nevertheless, he is eager to go back to his trusty Leica and continue pursuing his advocacy for his causes through powerful images.

At 66, Rocamora has no plans of slowing down. By the time this article is published, he will have been back in the Philippines, which he visits several times a year. Based on his findings from his work in prisons, he would like to call attention to the need for standardization and equal implementation of the penology system in the country.

He will resume his coverage of the efforts to build schools in Jolo and also raise awareness about the sorry state of healthcare in the Philippines. Rocamora says, “I hope that the recent economic indicators indicating a positive outlook for the Philippine economy would be reflected in the delivery of social services.”

A work in progress that is close to Rocamora’s heart and one of the reasons for his frequent visits to the Philippines is his collection of headshots of survivors of the Marcos dictatorship called “Dark Memories of Torture, Incarceration and Death under Marcos.”

In a previous interview with the Philippine Daily Inquirer, he stated that the goal of this project is “to insure that their experiences will not be forgotten and also to make sure we as a people will not allow again the imposition of martial law.”

More than 25 years after taking the remarkable photos of Filipinos rejoicing at the downfall of the dictator, Rocamora’s body of work has remained powerful and influential, a testament to his strong and unwavering commitment to justice and equality.

Note: On Sept. 27, 2013, at 7:30 p.m., Rick Rocamora will give a talk about his career as a documentary photographer and advocate for justice and equality at Sev’s Café, Legaspi Towers basement, 300 Roxas Boulevard, corner P. Ocampo (former Vito Cruz), Malate Manila. The event is free and open to the public.