MANILA, Philippines – Talks are underway to remove the concrete blocks allegedly put up by China in Panatag Shoal (Scarborough), an area off Zambales province and which is within the Philippines’ exclusive economic zone.

“Yes, as of now that’s being discussed as to how to, but I do not like to preempt what will (be) the decision,” Navy chief Vice Admiral Jose Luis Alano told reporters on the sidelines of the Asean Navy Chiefs Meeting in Makati City on Tuesday.

He did not elaborate further so as to not preempt the discussions being made. 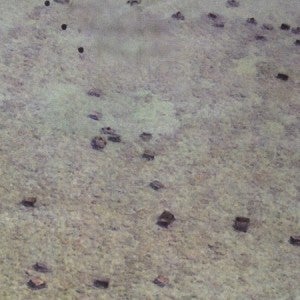 Seventy-five concrete blocks, believed to have been put up by China, were spotted in the Panatag (Scarborough) Shoal off Zambales based on a military reconnaissance report made last Monday. The blocks could be “a prelude to construction,” Defense spokesman Peter Paul Galvez said. File photo courtesy of Department of National Defense

Defense Secretary Voltaire Gazmin said that the concrete blocks sighted could be a prelude to construction.

Latest military reports showed that there were 75 concrete blocks allegedly put up by the Chinese.

Panatag Shoal, known to China as Huangyan Island, was a site of maritime standoff between China and Philippines that lasted for two months last year. Chinese presence continues in the area with its surveillance and fishing vessels.

In 1995, structures built by China were sighted in the Mischief Reef, an area near Ayungin also within the Philippine exclusive economic zone, where Chinese put up a military garrison.

These were reportedly built initially to provide shelter for fishermen, but were later transformed into a military garrison.

The Philippines had sought for arbitration under the United Nations Conventions on the Law of the Sea to pursue its claims in the West Philippine Sea. It filed a diplomatic protest as Chinese ships continued to come and go into the resource-rich areas of Panatag and Ayungin Shoal (Second Thomas Shoal), which were both within the country’s 200-nautical mile EEZ.

China claims nearly the entire sea and had been showcasing its aggressive behavior there, but the Philippines and other neighboring countries claim parts within their EEZ.