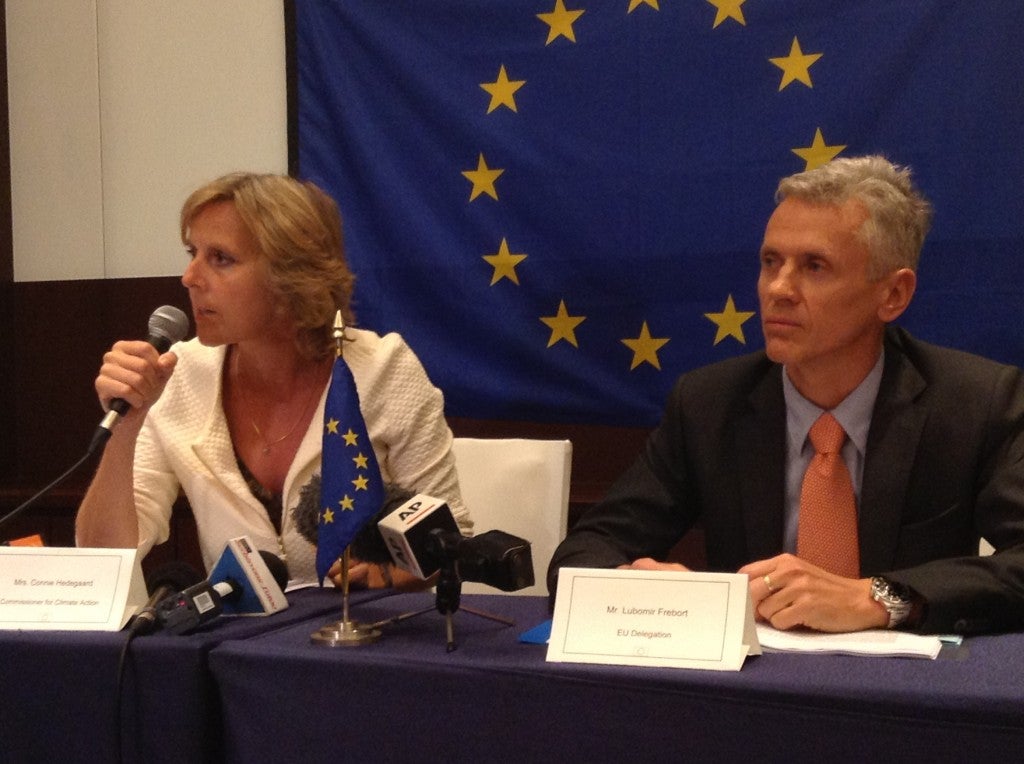 MANILA, Philippines – A European Union (EU) commissioner said they were banking on the Philippines’ support for the next climate deal, making all countries “equally and legally bound” to reduce greenhouse gas (GHG) emissions.

“I think that we [Philippine officials] share some views on how, in the process between now and 2015, we both need to inject ambition into the talks [on climate change],” EU Commissioner for Climate Change Connie Hedegaard said in a press conference in Makati Friday.

Both the Philippines and the EU are parties to the Kyoto Protocol, a treaty obligating states to reduce GHG emissions and reach a level that would prevent human-induced climate change. However, large emitters of carbon dioxide (a greenhouse gas) such as the United States and China remain uncooperative. Last year, states attending the United Nations Climate Change Conference agreed to extend the Protocol and develop a succeeding document by 2015.

Hedegaard said she would be spending her two days in the country talking to government officials and civil society groups about local environment programs and the international negotiations.

“It is extremely useful at this point to exchange views with a country like the Philippines,” she said, adding that the country will play a “very interesting role” amid its rank as third most vulnerable country to weather-related catastrophes, according to the World Bank.

“I know it’s only a few weeks back since most of this city was flooded. It’s interesting to be here when I know that to talk about climate change that is not to talk about some distant threat. It’s actually here. It’s been felt,” she said.

The EU Commissioner said she was also hoping that the Philippine government would “internationalize” what it has been doing for the environment amid having relatively low “per capita emission of 0.8 tons.”

“When you are doing these things, and when you have a climate law, why not inscribe it internationally and show to others, including the bigger ones, that if you can do it, why should they not be able to do it?” she said.

Hedegaard said the EU was committed to reducing its GHG emissions by 20% in 2020 or even higher if other parties make comparable commitments.

However, she said they understood that the greater burden was with developed and industrialized countries.

Despite the economic crisis, the EU Commissioner said they were able to come up with funding for programs in order to meet targets.

“What we believe in Europe is the intelligent way forward would be to solve our economic issues, our growth problems, development, challenges, and the job and social aspects and the environment and climate change at once. Because in the end it is about how we are creating the growth in the future,” she said.

According to Lubomir Frebort of the EU Delegation, they have been extending aid to the Philippine government through forest protection and assessment programs, the latter worth P60 million.

He said a number of European companies have also invested in renewable energy sources in the country, in addition to the government receiving P20 million for their low emission capacity building program.