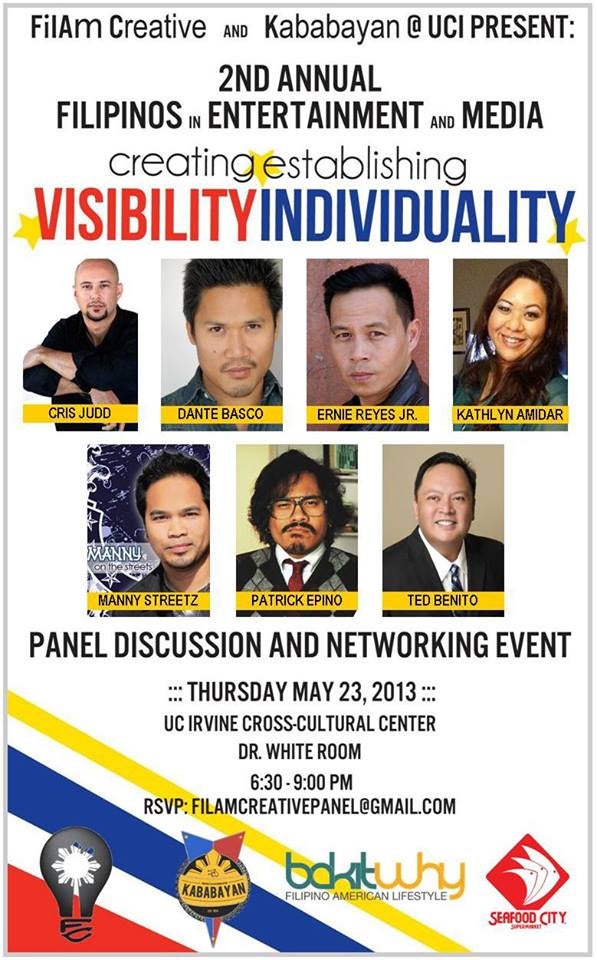 Announcement for one of FilAm Creative’s past networking events

LOS ANGELES—The intimate gathering sizzled with an energy and camaraderie typical of FilAm Creative’s networking events. This time, however, the group was celebrating its fourth anniversary on Aug. 13 at Far Bar in the heart of downtown Los Angeles, and high regard for the host was the common sentiment.

“It’s helped keep me in contact with the Filipino-American arts community here in Los Angeles,” said Gene Cajayon, producer and filmmaker known for directing “The Debut.”

“This is critical because it’s an uphill battle being an artist in this society, let alone a minority artist. So any organization that helps us support each other is a valuable resource,” Cajayon added.

FilAm Creative (FAC) is a non-profit volunteer organization dedicated to the advancement of Filipino-American professionals in entertainment and media. It provides a venue for artists, writers, filmmakers, actors, dancers, journalists and executives to network and make an impression as minorities in the industry.

The group now has over 200 members who come to the hosted events to network and share notes on their artistic endeavors.

It has come a long way since June 2010, when Ed Mallillin and Walter Boholst gathered a group of friends to answer the need for a Filipino organization that specifically served the artistic community.

Graphic Designer Krystal Meñez also underscored the importance of FAC to the small community of Fil-Ams in the entertainment industry. She lauded the tendency of Fil-Ams to come together and help each other.

“The concept of bayanihan is something that runs through our veins,” Meñez said. “If we can all work together to make things happen, we can become a more unified front and make big difference together in the community.”

While FAC isn’t the only Filipino-American entertainment group, it’s the only one with a board of directors and regular programs throughout the year.

“There are a few other groups, most of whom we’re friends with, but those are more just ‘friends getting together for drinks,’ whereas FilAm Creative provides programming and opportunities for artists to get together and truly network,” Mallillin said.

It also collaborates with Filipino and Asian organizations like FilAM Arts, Search to Involve Pilipino Americans, and the Coalition of Asian Pacifics in Entertainment to help promote their activities.

FilAm Creative’s next event will be the Music Showcase in October, featuring the talented singers, rappers and dancers in southern California.