LOS ANGELES—While thousands tramped to Luneta Park in Manila for the Million People March on Monday, about 100 Filipino-American activists held their own rally in front of the posh Ritz-Carlton Residences, where Jeane Napoles owns a unit.

The 23-year-old Napoles is the daughter of businesswoman Janet Lim-Napoles, who is being hunted by Philippine authorities for her alleged role in a P10-billion pork barrel scam.

The ralliers chanted: “Napoles, come out and give our money back.”

In a statement, Anakbayan demanded that the Philippine government prioritize “the people’s needs and not (the officials’) own luxurious lifestyles.”

Referring to the pork barrel in the Philippines, the group said: “For too long, these discretionary funds have been used to fatten the pockets of corrupt politicians at the expense of our people’s welfare.”

Also joining the rally were members of the Filipino Migrant Center (FMC), which said the LA protest was part of an “international day of action” for the abolition of the pork barrel.

FMC said overseas Filipinos workers (OFWs) in Canada, Hong Kong and other parts of the world joined the demand for an end to government corruption.

A few kilometers from Ritz-Carlton, more than 200 Fil-Ams gathered in front of the Philippine Consulate to show solidarity with the protesters in Luneta.

At the rally, Los Angeles resident Grace Piñol urged Filipinos around the world to demand that those behind the scam “be held accountable.”

Piñol claimed she was privy to an example of corruption involving a senator. She said her niece was in charge of a project in Mindanao that had been allotted P2.5 million from the senator’s pork barrel.

Some of the ralliers came from as far away as San Diego, a two-hour drive from LA.

“I want to show those (corrupt) politicians that we are watching them and that we are united with the protesters back home,” said veterinarian Felix Lapuz. 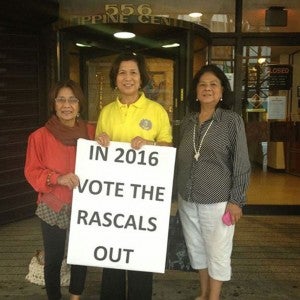 Actor and community leader Bernardo Bernardo bewailed what he described as “mafia-style” corruption in the Philippine government.

“Something has to change and it has to happen now,” he said.

“I am also against government corruption. So is our President and I’m glad he has been making some headway in his fight against corruption,” deputy consul general Dan Espiritu said.

He said Filipino politicians should heed the call of Fil-Ams because they represented 4 million Filipinos in America.

Around 150 Filipinos gathered outside the Philippine Consulate in New York to call for the abolition of the pork barrel, a migrants’ rights activist said.

Filipino community leader Daphne Ceniza Kuok said many of those who attended the picket came wearing white. They submitted a petition against the pork barrel.

In their petition, the protesters said President Aquino’s announcement that he was reforming the pork barrel system “did not go far enough.”

“He should … get rid of the system that has allowed our politicians to dip their hands into the country’s coffers practically at will, while a majority of Filipinos suffer from grinding poverty,” said the petition, signed by around 200 Filipinos living in different countries.

OFWs in Abu Dhabi and Dubai wore white in their workplaces as a sign of protest. Although mass action is banned in Saudi Arabia, Filipinos expressed their solidarity through social media by posting their protest photos.

Mass protests started last week in Hong Kong. The OFWs called for the prosecution of those involved in the scam.

Arlene Andes,  based in Brussels, told Radyo Inquirer that the OFWs in Europe had also turned to social media to urge the scrapping of the pork barrel.—With reports from Philip C. Tubeza, Jocelyn R. Uy and Susan K of Radyo Inquirer