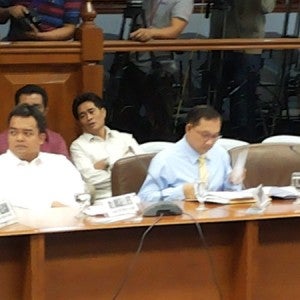 Assistant labor attache Antonio “Tony” Villafuerte faced anew at Thursday’s resumption of the Senate investigation into the “sex-for-scheme” scandal in the Middle East.

MANILA, Philippines–Three labor attachés allegedly involved in the sex-for-flight scandal will be charged with administrative cases, the Department of Labor and Employment (DOLE) said in a press briefing aired on radio and television Friday.

On August 15, three Overseas Filipino Workers (OFWs) testified in a Senate hearing that these officials had allegedly sexually harassed female migrant workers based in Riyadh in Saudi Arabia.

Partylist Representative Walden Bello had alleged that distressed Filipino workers seeking refuge at various Philippine embassies in the Middle East had been forced into prostitution or were being sexually exploited in exchange for transportation fare home.

In addition to the charge of simple negligence against Villafuerte, Labor Secretary Rosalinda Baldoz also approved the recommendation by a DOLE team that investigated the so-called “sex-for-flight” that a sexual harassment complaint against him be referred to the DOLE Committee on Decorum and Investigation (CODI).

The CODI is tasked under RA 7877, otherwise known as the Anti-Sexual Harassment Act of 1995, and Civil Service Commission Resolution No. 01-0943, series of 2001, to investigate and hear sexual harassment complaints.

The CODI has five days from receipt of the complaint to conduct a preliminary investigation and, if warranted, proceed to formally charge Villafuerte. The CODI has 15 days from the filing of the formal charge to submit its report and recommendation.

Imposable penalties under RA 7877 range from suspension to dismissal from service, Baldoz said.