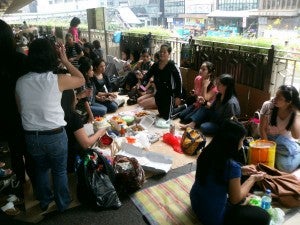 MANILA, Philippines—Migrant workers in Hong Kong started Thursday the chain of mass protests for the abolition of the Priority Development Assistance Fund or “pork barrel”, Radyo Inquirer 990 AM reported.

Hundreds of Hong Kong Overseas Filipino Workers (OFWs) will march to the Philippine Consulate General’s office to express their displeasure over the alleged misuse of the “pork barrel” fund by legislators.

The protest stemmed from a series of exposes by the Philippine Daily Inquirer against the “pork barrel” and a Commission on Audit report that virtually confirmed these allegations.

“The corruption stemming from the pork barrel given to the members of the congress and even to the President is unraveling,” United Filipinos in Hong Kong (UNIFIL-HK) secretary general Eman C. Villanueva said.

Aside from scrapping the “pork”, the Hong Kong-based group called for the prosecution of government officials involved in the rechanneling of billion-peso funds meant for social services such as public education, health, services and housing to bogus non-governmental organizations.

Aside from the Hong Kong-based OFWs, militant groups like Gabriela and the Promotion of Church People’s Response (PCPR). Will hold separate mass actions.

The “Million People March to Luneta” event on Facebook currently has over 10,000 attendees.