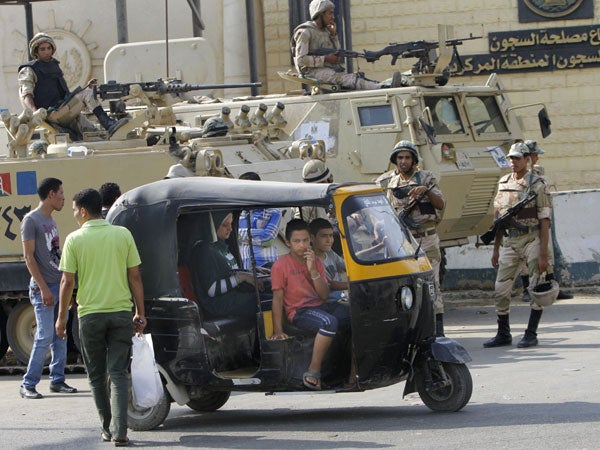 Egyptians drive their traditional tok-tok in front of armored vehicles guarding Torah Prison, where ousted President Hosni Mubarak is held in Cairo, Egypt, Wednesday, Aug. 21, 2013. The Philippine government has raised alert level 4, and is footing the bill in the forced repatriation of Filipinos, mostly students and domestic helpers, from Egypt. AP

MANILA, Philippines—The government is footing the bill in the forced repatriation of Filipinos, mostly students and domestic helpers, from Egypt.

President Aquino had already released US$240,000 for the mandatory evacuation of some 6,000 Filipinos from Egypt following a visit to the Arab country by Foreign Affairs Secretary Albert del Rosario.

“There is an initial $240,000 sent to the (Philippine embassy in) Cairo for repatriation,” said Aquino in an ambush interview on Wednesday, after distributing relief goods to typhoon evacuees at Mandaluyong Elementary School.

The President estimated the total number of affected Filipinos in Egypt between 5,000 and 6,000.

“Initially, there are only five who are coming home (Wednesday) and many are resisting (repatriation) because they don’t want to lose their jobs, especially for those who are working (there). But the situation is really serious. We will not call for level 4, which is forced repatriation, (if it isn’t so),” he said.

Under Alert Level 4, Filipino workers, residents and students will be flown home from Egypt at government’s expense.

“I’m sure the (Philippines) embassy in Egypt has been preparing for this, and has been actively trying to encourage our countrymen to ensure their safety to leave Egypt at this time,” he said.

The fund, which would come from the budget of the Department of Foreign Affairs, would cover the plane fare and “other expenses related to repatriation” of Filipinos living in Egypt, said deputy presidential spokesperson Abigail Valte.

Del Rosario, who recently investigated the security situation after days of violent clashes between supporters of ousted President Mohammed Morsi, raised on Monday the fourth crisis alert level over Egypt, the highest in its four-tier overseas emergency alert system.

The rising violence in Egypt has left 900 people dead following a crackdown on the protest camps of supporters of the ousted Islamist president.

When asked if his administration could provide the overseas Filipino workers with jobs upon their return, Aquino said:

“Just like what happened in the Arab Spring in Libya. If I remember correctly—I’m drawing from memory—AG&P hired almost 4,000 soon after they returned to the Philippines,” said Aquino.

AG&P, or Atlantic, Gulf and Pacific, is an industrial process outsourcing company, a Filipino company, which has partnered with some of the largest multinational companies on critical resource and infrastructure projects in the country and in North America, Australia, Southeast Asia, Latin America, Europe and Africa.

“(Labor) Secretary (Rosalinda) Baldoz, I’m sure, will be preparing to assist them together with Tesda (Technical Education and Skills Development Authority) and other government entities to impart (to them) the necessary skills for reintegration,” said Mr. Aquino.

He said providing returning OFWs with livelihood opportunities was “automatic.”

“But here (in this case), because it’s forced (repatriation and) since the 5,000 is not an inconsequential number, I’m sure the concerned departments are now making preparations,” said Aquino.

Del Rosario had recommended to the President the mandatory repatriation after he observed marked deterioration of peace and order in Egypt, exacerbated by the ongoing political instability and grave security challenges in that country.