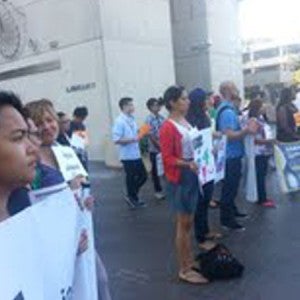 Various groups gather in front of the City Hall of Long Beach to press for a “language access” policy. PHOTO BY JOY PRIM

The coalition began a phone campaign to push Long Beach officials to release the language access policy draft, knowing that the most common languages spoken in the city are other than English, namely Spanish, Khmer and Tagalog.

“We realized that there was no real promise for language access for Khmer and Tagalog, and we reacted quickly to what these people need,” stated Alex Montances, Filipino Migrant Center staff representative who attended coalition meetings.

“There were cases of monolingual people, like Khmer, at city meetings and with no interpreter made available by the council,” stated Susanne Browne, senior attorney with the Legal Aid Foundation of Los Angeles. 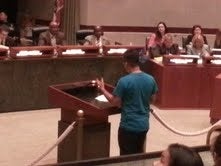 Alex Montances of the Filipino Migrant Center speaking to the City Council of Long Beach in support of translation services. PHOTO BY JOY PRIM

Translators and interpreters are needed to convey information accurately from one language to another in different settings and situations, so that minorities understand basic needs and services in health, work, education, food and housing services.

The LB Language Access Coalition stated that the city’s language policy will help residents become more aware of services, be more interested and less intimidated in city affairs as well as gain more visibility for their ethnicity.

“The truth is that Filipino-Americans in Long Beach are not as visible as they should be in the city,” says Montances. The language access campaign had no Filipino representation until Filipino Migrant Center joined the Long Beach Language Access Coalition in June this year.