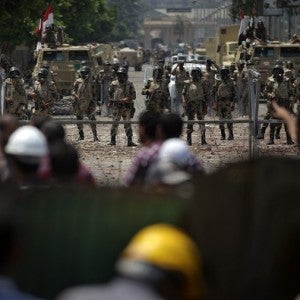 CAIRO—Egypt’s Christians are living in fear after a string of attacks against churches, businesses and homes they say were carried out by angry supporters of ousted Islamist President Mohammed Morsi.

As police dispersed Morsi supporters from two Cairo squares on Wednesday, attackers torched churches across the country in an apparent response.

“People are terrified; no one dares leave home,” Marco, a 27-year-old engineer, told Agence France-Presse by phone from the central city of Sohag.

The city has become a ghost town, he said, describing an atmosphere of terror where attackers “know where the Copts live” and torched several churches before turning to homes.

The Maspero Youth Union, a Coptic Christian youth movement, denounced what it called a “retaliation war” against the religious minority, which makes up around 10 percent of Egypt’s population.

The group accused Morsi supporters of targeting them in response to Coptic Pope Tawadros II’s support for the July 3 coup that ousted the Islamist leader.

The Egyptian Initiative for Personal Rights (EIPR), a local NGO, says at least 25 churches were torched on Wednesday and Thursday, and that attackers also targeted Christian schools, shops and homes across 10 of Egypt’s 27 provinces.

Iraq’s Chaldean Christian Archbishop Louis Sako told AFP that one of his community’s churches was among those targeted on Wednesday.

“This is a real disaster,” he said, describing the region as a “dangerous volcano.”

For Marco, the attacks against the churches were not a surprise—Christian religious buildings have been targeted before.

It was the torching of Coptic Christian homes and the looting of their businesses that shocked him.

The attackers were “people chanting pro-Morsi slogans and wearing headbands with the phrase ‘Muslim Brotherhood’ written on them,” he said.

The Maspero Youth Union, which documented abuses against Christians during Morsi’s one year in office, also laid blame for the attacks on supporters of the ousted leader.

“Maspero Youth Union condemns the terrorism Copts are facing now in Egypt after supporters of ousted President Mohammed Morsi waged a retaliation war against Copts and their churches, homes and businesses,” the group said.

“Copts were attacked in nine governorates, causing panic, losses and destruction for no reason and no crimes they committed except being Christians,” the group said.

Ironically, Christians were also targeted when Mubarak was in power.

On Thursday, the country’s interim army-installed government described attacks on Egypt’s Christians as a “red line” and pledged that authorities would “respond forcefully” to any new attack.

Shortly afterward, the defense minister, Gen. Abdel Fattah al-Sisi, the army chief who led the coup, pledged that the military would pay for the rebuilding of the churches attacked on Wednesday.

On Thursday morning, Interim Prime Minister Hazem Beblawi also announced he had met with Coptic Pope Tawadros II to express solidarity in the wake of the attacks.

And state news agency MENA reported that 80 Morsi loyalists had been arrested and turned over to military courts for their alleged involvement in torching churches in Suez province on Wednesday.

The Muslim Brotherhood made its first comment on the attacks on Thursday evening—a condemnation tempered by the assertion that many Copts supported Morsi’s ouster.

“Although some Coptic leaders supported or even participated in the coup, for one reason or another, no such attacks can be justifiable,” the group’s political arm said on its official Twitter account.

The government’s promises have so far failed to convince Christians and activists that authorities would prevent future attacks.

“The state must intervene to protect the population. Concrete action is needed after all the big speeches,” said Ishak Ibrahim, an EIPR researcher on religious issues.

He described a “discourse of hatred” against Christians throughout the country, more from the Salafists, the most conservative of Islamists, rather than members of the Muslim Brotherhood.

And he pointed out that most of the attacks had taken place outside the major cities, in areas where security presence is often minimal.

“Families who are too scared to go out to get supplies are waiting for something concrete,” Ibrahim added.

In Sohag, residents remain desperately afraid of what awaits them, with Karem, a local, urging authorities to send security forces to help.

“No one is protecting us!” Karem said.