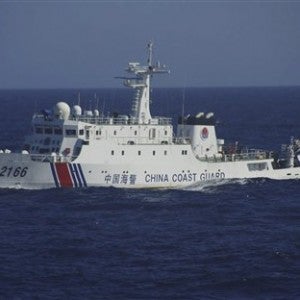 TOKYO – Chinese coastguard ships on Friday sailed into disputed waters at the center of a bitter row with Tokyo, officials said, a day after China blasted Japanese lawmakers for visiting a controversial war shrine.

The four government vessels spent about two hours within the 12-nautical-mile band around the Tokyo-controlled Senkaku islands — which Beijing calls the Diaoyu islands — in the East China Sea.

Japan’s coastguard said the vessels had left territorial waters by 12:30 pm (0330 GMT) but remained in the area.

Following the incursion, Junichi Ihara, head of the Japanese Foreign Ministry’s Asian and Oceanian Affairs Bureau, lodged a protest with a senior diplomat at the Chinese Embassy in Tokyo, Kyodo News agency reported.

Kyodo said seven ships were spotted just outside of the waters earlier Friday, before the four Chinese coastguard vessels entered the disputed waters.

The incursion came after Beijing on Thursday summoned Japan’s ambassador to condemn a visit by nearly 100 Japanese lawmakers to the Yasukuni shrine on the anniversary of Tokyo’s World War II surrender.

Japanese politicians’ visits to the site are seen as a slap in the face by neighboring nations, especially China and South Korea, which suffered from Tokyo’s imperialist expansion in the first half of the 20th century.

Friday’s incident was the latest in a series of incursions by Chinese ships as relations between Tokyo and Beijing plumb all-time lows.

Last week, the Japanese foreign ministry summoned Beijing’s envoy after Chinese ships spent more than a day in the disputed waters, marking their longest such incursion since the long-simmering dispute erupted again last year after Tokyo nationalized some of the chain.

The islands — believed to harbor vast natural resources below their seabed — are seen as a potential flashpoint that some observers fear could lead to armed conflict between the Asian giants.