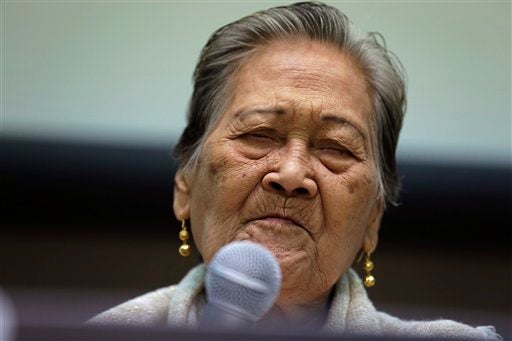 Philippine former sex slave Estelita Dy speaks during an event with her supporters in Tokyo, Sunday, Aug. 11, 2013. Dy, 83, and her supporters have gathered to renew their demands that Japan do more to bring justice to the victims of the country’s wartime sex slavery. AP Photo

TOKYO — A Philippine former sex slave and her supporters have gathered to renew their demands that Japan do more to bring justice to the victims of the country’s wartime sex slavery.

Eighty-three-year-old Estelita Dy and her supporters met in Tokyo on Sunday as part of events to commemorate the day the first sex slave victim came forward in South Korea on Aug. 14, 1991.

The group is trying to promote international support to register August 14 as an official United Nations memorial day, to pressure Japan to do more to take responsibility for wartime sex slavery.

Historians say there were as many as 200,000 sex slaves, mostly Koreans.