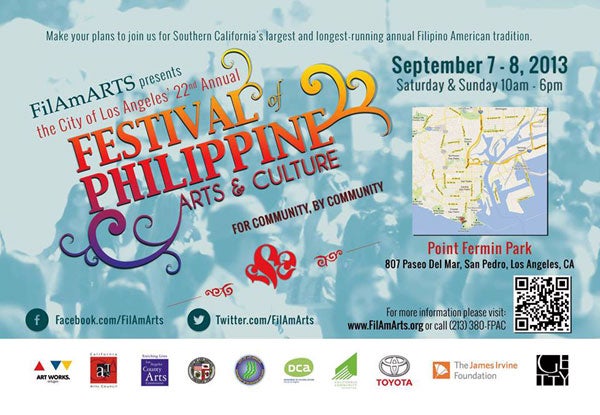 SAN PEDRO, California—Thousands are again expected to attend the Festival of Philippine Arts, one of the biggest annual events in this city. Organizers are counting on some 25,000 visitors and 500 artists to participate in what has come to be known as FPAC.

The celebration of Filipino culture through art, film, dance, poetry, literature and food marks its 22nd year on Sept. 7 and 8 from 10 a.m. to 6 p.m. at Point Fermin Park. Organizers have also launched a new storytelling program that began last July 20.

FilAm ARTS (Association for the Advancement of Filipino American Arts and Culture), the premier Filipino-American organization in Southern California, hosts the event whose theme this year is “For Community, by Community.”

The first FPAC was held in 1992 at Los Angeles City College, days after the Los Angeles “Rodney King riots.” It was part of a project conceived by Los Angeles County along with hundreds of artists and community leaders to help the city heal through cultural gatherings.

FilAm Arts also unveiled a new storytelling program called The Saysay Project at the Echo Park Library Community Hall on July 20. The pilot event aims to become an outlet for a multicultural community to tell their personal stories in an intimate setting. It also wants to relate the experiences of Filipino-Americans from different perspectives. The Tagalog word “saysay” means two things: to have intrinsic value and to narrate.

Jilly Canizares, executive director of FilAm ARTS, said that many tales are left untold after big events such as FPAC, and people often forget to reflect on their experiences. “Because we’re going so fast, the need to share stories is important,” Canizares said. “We need to bridge the gaps.”

Leading the event was writer and performer Giovanni Ortega, author of the play “Allos: The Story of Carlos Bulosan,” which was presented at East West Players, and Leaves from the Silverlake Barrio, a compilation of poems and stories about growing up in the Philippines and  the US.

Ortega led a group of 40 people in discussions of childhood, living in the US and encounters with racism. The attendees came from an array of backgrounds—recent immigrants, first-generation Americans, Hapas (half-whites from Hawaii), mainland Filipinos, military kids and children of manual laborers.

The Saysay Project together with Philippine Consul General also launched an online essay and video contest for elementary and high school students. Students can submit an essay or video to describe an experience that made a positive impact on their identity as Filipino American. Six grand prize winners and 100 honorable storytellers can win cash and a chance to perform at this year’s FPAC.