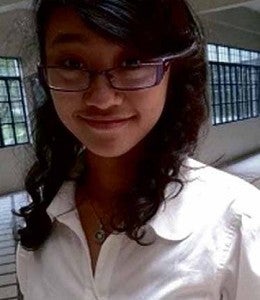 INQUIRER scholar Jhesset Enano says, “I look forward to telling more and better stories of the people, may it be of the successful or the still hard-at-work, and to let the voice of those without be
heard,” as she prepares for her American sojourn. CONTRIBUTED PHOTO

MANILA, Philippines—“My three years at UP have taught me a central principle: Serve the people. It is a constant reminder that everything I do should not simply be for myself, but for the advancement of the nation and of its people.”

That was Jhesset Thrina Enano, a journalism student at the University of the Philippines Diliman, summing up her life experience thus far, on the eve of a giant leap in her pursuit of learning and academic excellence.

Along with four other successful nominees from the Philippines, Enano was picked from a pool of 51 applicants to be part of the 2013 Global Undergraduate Exchange Program in the United States.

Funded by the US Department of State and administered in this country by the Philippine-American Educational Foundation—also known as the Fulbright Commission in the Philippines—the program aims to “provide a large and diverse group of student leaders with an in-depth exposure to US society, culture and academic institutions by engaging them in substantive academic exchanges in colleges and universities in the United States.”

Selection was based on merit in the form of academic accomplishments, leadership and ambassadorial skills, and commitment to serve one’s country.

Under the Global Exchange Undergraduate Program, Enano will be enrolled in full-time undergraduate course work at the University of Mississippi in Oxford, Mississippi, to study journalism from August 2013 to May 2014.

Constantly delighted by ideas of travel, discovery and learning, Enano said she was excited for the coming adventure. She said she was looking forward to the appreciation of different cultures and the procurement of knowledge that the exchange program will offer.

In this undertaking, she added, she is determined to embody “a proud Filipino representing the country and a student beyond the classroom with an open heart and mind.”

Enano is a recipient of a Philippine Daily Inquirer scholarship given to deserving students of journalism. Her summer internship at the newspaper provided her with training and hands-on experience in news production in the field. She was grateful for the opportunity, she said.

Last year, she won third place in the Kabataan Essay category of the Carlos Palanca Memorial Awards for Literature for her entry titled “What We Are Losing.”

On her return to the Philippines next year, Enano said she intends to “give back and pay it forward” by sharing what she would be learning in the US with her peers and colleagues as she finishes her journalism degree at UP next June.

“With a broader perspective, I look forward to telling more and better stories of the people, may it be of the successful or the still hard-at-work, and to let the voice of those without be heard,” she said.

Read Next
Illegal OFWs in Saudi urged to apply for jobs
EDITORS' PICK
PH preps for China virus: Question of when, not if
Museums ‘put to sleep,’ churches closed amid volcano’s unrest
SM continues to send relief assistance to remote towns in Batangas
Beyond water service: Maynilad builds massive infrastructure projects to clean up Metro Manila waterways
Seventh judge assigned to handle De Lima case
Timeless Elegance in the Philippines’ Most Distinguished Home Kitchens
MOST READ
Lacson on Duterte’s threat to end VFA over Bato’s canceled visa: Where is the connection?
Part of Aurora Boulevard in Cubao closed from Jan. 25 – Feb. 1
No Bato visa, no VFA–Duterte
Corruption worsens: PH falls 14 notches to 113th spot in global index 2019
Don't miss out on the latest news and information.