Obama names next envoy to Philippines 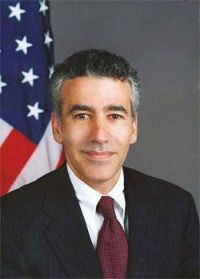 MANILA, Philippines—United States President Barack Obama has nominated a State Department intelligence official for the next United States ambassador to the Philippines.

Philip Goldberg, Assistant Secretary at the Bureau for Intelligence and Research (INR) at the US Department of State, will replace outgoing US Ambassador to the Philippines Harry Thomas Jr., if confirmed by the US Congress, the US Embassy in Manila said yesterday.

Thomas will be leaving the Philippines soon, having completed a three-year tour of duty here.

Goldberg, 57, was one of eight officials that Obama nominated to key administration posts on July 30, including the new US envoys to Indonesia, Namibia, Trinidad and Tobago, Cameroon, Argentina and Niger, as well as a new deputy interior secretary.

“I am grateful that these impressive individuals have chosen to dedicate their talents to serving the American people at this important time for our country. I look forward to working with them in the months and years ahead,” Obama said in a statement that the US Embassy released on Wednesday.

Goldberg, a career diplomat, has served various posts around Eastern Europe, Africa and Latin America throughout his career.

A Boston native, Goldberg served as the State Department’s Bosnia Desk Officer from 1994 to 1996, during the Bosnian War. He returned to the home office as special assistant and later executive assistant to the deputy secretary of state until 2000.

He briefly served as acting deputy assistant secretary for legislative affairs in 2001 before being posted in Santiago, Chile, as charge d’affaires and deputy chief of mission until 2004.

Goldberg then served as chief of mission in Pristina, Kosovo, from 2005 to 2006 before being posted to Bolivia from 2006 to 2008, his last known overseas posting.

His time in Bolivia was punctuated by controversy after Bolivian President Evo Morales kicked him out of the country in 2008, accusing the US envoy of meddling in state affairs amid the political unrest in the South American state.

Bolivia suspected Goldberg of provoking the political opposition and of ordering US Peace Corps volunteers to undertake surveillance in their areas of assignment, charges that Washington denied.

Morales, who figured in the news earlier this month after Europe diverted a plane carrying the Bolivian president suspected of carrying US fugitive and intelligence whistle-blower Edward Snowden, is known to be an ally of Venezuela, a US critic.

Goldberg also served as an officer at the US Embassy in Bogota, Colombia and Pretoria, South Africa.

His office, the INR, also “analyzes geographical and international boundary issues,” according to the State Department website.