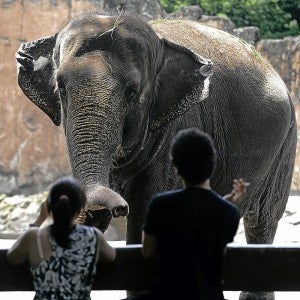 MANILA, Philippines—Mali is not going anywhere. She is here to stay.

As Manila Zoo marked its 54th anniversary Thursday, Mayor Joseph Estrada reiterated his earlier pronouncements that he would not allow its most popular resident to be transferred to an elephant sanctuary, a move that, according to a veterinarian, made the “old lady” happy.

The sentiment was reflected in the streamers, placards and letters that were displayed around the zoo as well of expressions of gratitude to Estrada for his decision to keep Mali and plans to upgrade the zoo’s facilities.

“I want to boost tourism in our city so I will not let Mali leave the place she grew up in,” Estrada said in a speech read by Vice Mayor Francisco “Isko Moreno” Domagoso.

“Nothing can match the smiles and joy brought to us by animals like a lion, tiger, giraffe, deer and Mali, the famous elephant,” he said.

He added that Mali needed friends, saying: “We will give her companions so that she will not be sad.”

Estrada earlier announced that he was in talks with investors from Singapore who were planning to infuse about P2 billion to modernize Manila Zoo. He said that he had also requested the Sri Lankan government to give the zoo two more elephants once the renovation was completed.

The animal rights group People for the Ethical Treatment of Animals and celebrities like Paul McCartney and Morrissey, have urged the Philippine government to transfer Mali to an elephant sanctuary in Thailand, saying she was sick and lonely.

Other animal activists, however, were not in favor of the PETA proposal.

According to Ken Chua, a veterinarian with the Animal Welfare Coalition, the life span of an elephant in captivity is 42 years and at 39, Mali is an old lady.

“If Mali left the country, there is a big chance that she will not reach Thailand safely,” she said.

A trip to Thailand would put the old elephant under a lot of stress as she would be placed in a crate, loaded into an aircraft, quarantined and perhaps sedated, Chua added.

“In Mali’s case, sedatives could be fatal and she would undergo quarantine procedures in Thailand,” she said.

“Your decision made an old lady very happy,” Oscar Macenas of the Philippine Veterinary Medical Association said in a message to Estrada.

During a program marking the zoo’s anniversary, three tiger cubs, an elongated tortoise and red-eared slider turtles were presented as newborn additions to the more than 700 animals in the zoo involving 104 species. A lion cub was donated while a female zebra foal was recently born.

Members of the Autism Society of the Philippines and Photography with a Difference attended the program, feeding bananas to and taking pictures of Mali.

Of the P14 million allotted annually for food, P300,000 goes to medicine. Entrance to Manila Zoo costs P40 for adults and P20 for children, while Manila residents are charged half the price.

Read Next
US debt deal helps Philippines save forests
EDITORS' PICK
Renewal of driver’s license now requires taking LTO education seminar
Climate Change Commission and Nestlé PH to discover sustainability-focused solutions
PH still at bottom of COVID-19 economic resilience ranking
Work-From-Home is here to stay and requires reliable logistics
Legarda emphasizes role of ICC/IPs in nation building this IP month
TNT nears PBA crown after rout of Magnolia in Game 4
MOST READ
Drivers now required to take driver’s education upon license renewal – LTO
Marcos Jr’s ‘special diploma’ from Oxford: You can have it, too
OVP spox to Imee Marcos: Robredo is an extraordinary lawyer
Don’t do that: Robredo to supporters calling to boycott restos supportive of Marcos
Don't miss out on the latest news and information.