SAN FRANCISCO–The US Pinoys for Good Governance organized community meetings in preparation for “global” demonstrations in front of China’s embassies and consulates on July 24 in protest of China’s “shoal-grabbing” of Philippine territory.

Organizers charged that since two years ago, China has consistently pursued, threatened and encroached on minimally guarded or unattended Philippine reefs, islets and shoals in the West Philippine Sea. 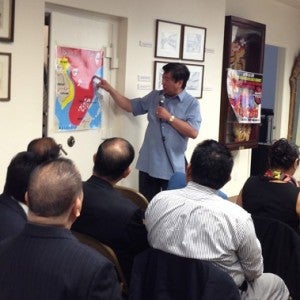 The protest in New York July 24 will be at the United Nations at 1st Avenue and 43rd Street from 12 noon to 1 p.m. Mass actions across the US and the Philippines are likewise being held.

Lewis said, “We are called upon as citizens of the world where our Mother Country is being harassed by China to give up the wealth of the seas that belong to the Philippines. People of good faith individually have to answer the cry of help by our Inang Bayan (Mother Country).”

Similarly, Filipinos met in San Francisco’s Philippine Center social hall on July 12 for a teach-in on the West Philippine Sea conflict. The demonstration on July 24 will in front of the Chinese consulate on 1450 Laguna St. near Geary.

Rodel Rodis, USPGG president said, Filipinos all over the world must join the protest, and get the world to notice that China has been invading Philippine’s strategic shoals to claim the rich natural resources beneath the West Philippine Sea.

“Should China succeed in this unfathomable act, it will become second only to Saudi Arabia as source of massive petroleum and gas deposits, instead of the Philippines,” he said.

Vietnamese-Americans are being mobilized by retired immigration judge Phan Quang Tue and Atty. Tam Nguyen, who attended the San Francisco meeting , coming all the way from San Jose to reiterate their solidarity with their Filipino neighbors.

They still remember with gratitude how the Philippines was the only nation in Asia to first welcome Vietnamese refugees after the Vietnam war. Vietnam also has territorial conflicts with China. 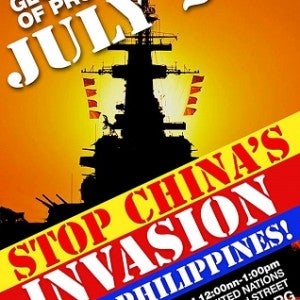 In Manila, on July 24, newly elected Senator Grace Po will lead a long list of politicians and lay leaders at the rally infront of China’s embassy. The hour-long noontime rally will also be attended by a group of singers and song writers who will launch a protest song.

Ayungin Shoal is now in China’s crosshairs, the last and most important shoal strategically located at the doorstep of Recto Bank where an estimated $250-billion worth of fossil fuel and gas reserves lie.

On May 8, three Chinese naval ships were seen surrounding the Spratlys’ Ayungin Reef, 105 nautical miles from the Palawan island and thus, clearly within the 200-mile exclusive economic zone of the Philippines.

The Ayungin Reef is regarded as the “gateway” to the Reed Bank (Recto Bank), which, according to the United States Energy Information Agency (EIA), may contain 2.5 billion barrels of oil and 25.5 trillion cubic feet of natural gas based on assessments conducted by the United States Geological Survey (USGS).

In 1994, China seized the Philippines’ Mischief Reef and in 2012, Scarborough Shoal. The Philippines on January 22 formally filed its claim against China under the terms of the United Nations Convention on Law of the Sea (UNCLOS).

USPGG appeals to all Filipinos, their friends and neighbors to hold a protest rally in front of every China embassy or consulate in major cities around the world– in Washington DC, New York, Chicago, Los Angeles, Manila, Italy, or London, and carry protest placards like “China out of Philippine Shoals” and “Stop China’s Invasion of the Philippines.”

For more information on US Pinoys for Good Governance visit to www.uspgg.org