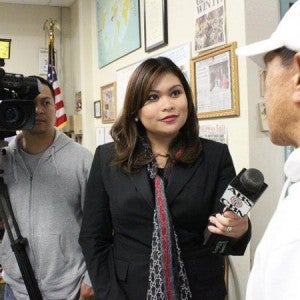 Henni Espinosa interviewing Rudy Asercion, executive director of West-Bay Piipino Multi-Service Center, and one of the Champions of SOMA. PHOTO BY MANDY CHAVEZ

SAN FRANCISCO—“Dream big.” This is the message Emmy Award-winning television news reporter Henni Espinosa wants to share with her compatriots.

Espinosa has been dreaming big from the time she started reading the newspaper out loud at home when she was five years old, to the night she held the Emmy statuette aloft on stage in San Francisco last June 15.

That night, she made Filipino television history when she took home an Emmy as the host, executive producer and writer of “The Filipino Champions of SOMA,” under the “Public/Current/Community Affairs-Program/Special” category.

It is the first full-length news documentary produced by a Filipino journalist for a Filipino-owned network that has been awarded the Emmy. Espinosa is the senior reporter and one of the anchors of ABS-CBN International-The Filipino Channel’s (TFC) Balitang America.

Featuring three Filipinos in the South of Market area of San Francisco who do extraordinary things for the community, the documentary was aired worldwide last year through TFC and, later, on the Public Broadcasting Service (PBS), as part of its Asian-American Heritage Month

An Emmy Award is the most important recognition in the US television industry and corresponds to the Academy Award for film, the Tony Award for theater and the Grammy Award for music. But the award was even more gratifying to Espinosa “because we were up against mainstream stations.”

Even before winning theEmmy, “The Filipino Champions of SOMA,” had already won several awards earlier in the year, including a Telly in the documentary category at the 34th Annual Telly Awards, besting 12,000 entries from all 50 states and five continents.

Espinosa also was named a finalist in the New York Festival’s World’s Best Television & Films Awards in the “Community Portraits” category, competing against big networks like CNN. The competition, now on its 55th year, honors programming in all lengths and forms from over 50 countries.

A budding journalist at age 8

Espinosa recalls with amusement the time at age eight when she dragged her parents to a kiddie show so she could take part in a segment of the program where kids did a newscast reading from printed material. One might say that this was when her journalistic career got its start. 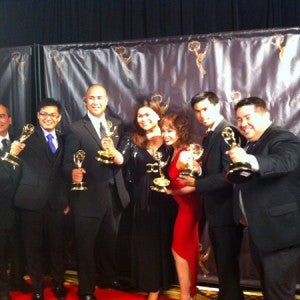 The Balitang America team showing off their Emmy trophies; Espinosa is in the center. PHOTO BY MANDY CHAVEZ

Or maybe it all started in 2000 when she received a full scholarship from the Rotary Club of Georgia, through its Georgia Rotary Student Program, to take her masters in communication at Georgia State University in Atlanta, Georgia.

“In my mind, I always wanted to be a reporter,” she recalls, “and it’s as if the stars were aligned for me, and the direction was set for me to be where I am now.”

Espinosa believes that Divine Providence has played a big hand in setting her on the path to a career in journalism. First, she got into the broadcasting at the University of the Philippines in Diliman, which offered what she considers the best communication program in the Philippines.

Toward the end of her college years there, she wasn’t thinking of going for her master’s in the US. But her father’s friend who had been past district governor of the local Rotary called and told him about a scholarship the Rotary was offering. Espinosa would have to compete for it; she did and she won.

However, her father, like every typical father, was hesitant to let his daughter leave and live by herself in such a faraway place as the US where they didn’t know anybody. But Providence played a hand again in the form of a former US fire chief, Victor Robinson, who had come to Bacolod many years back to help train the city’s fire department and whom Henni’s mother had tutored in Tagalog during his stay.

Robinson, fortuitously, came back to Bacolod right about that time to look for his former tutor but, due to an accident, he had lost parts of his memory and could not remember the name of Espinosa’s mother. He only remembered her smile and that she had a chubby little daughter—Henni.

Armed only with the memory of that smile and of the chubby little girl, Victor enlisted the city’s fire brigade to search all over Bacolod City for his teacher from long ago, asking every school teacher in the area to smile so he could identify her.  After a long and arduous search, he found her just as he was about to give up.

In that happy reunion and learning of her father’s apprehensions, Robinson volunteered to be Espinosa’s substitute father in the US, promising to take care of her there. Her father’s fears allayed, she was able to leave and pursue her further education in broadcasting.

It was also providential that rather than getting one of the many other regional Rotary scholarships that might have sent her to other parts of the US, she got the one that sent her to a university in Atlanta, which happened to be located just a few blocks from the CNN headquarters. That she was so close to CNN enabled her to intern there, one of the most dominant news networks then and now, and have her stories aired on CNN and CNN International.

In the 10 years that she has covered the Bay Area, she has encountered many “unsung heroes.”

But their stories, she said, are so interesting “we decided to do a documentary to really tell the stories not just of these Filipinos but of the people whose lives they touched. If you strive to just make a difference in one’s person’s life everyday, I think every day is a better day not just for you but for the people you’ve touched.”

On stage during the awards night, clutching her Emmy trophy and surrounded by her team, she thanked “the “Filipino champions of SOMA who showed us that no matter your race, no matter your stature in life, you can make a difference.”

Espinosa has reported on the plight of the Filipino World War II veterans and their widows, the abuse of Filipino caregivers and hotel workers, the struggle of low-income Filipino families and seniors, the fear of undocumented Filipinos from being deported and the Fil-Am activists’ campaign to end human rights abuses in the Philippines. Her stories have also shed light on issues affecting mainstream America today such as unemployment, foreclosures and homelessness.

For giving a voice to the Filipino community through her stories, she was awarded the Jose Rizal Community Hero Award by the Northside Community Center in 2004. She was also given a Certificate of Recognition by the California Senate for receiving the award.

In 2008 she received another Certificate of Recognition from the California Senate for her valuable work as Vice-President for External Affairs of the Philippine American Press Club.

In 2011 she was given the Media Bayani Award by BAYAN-USA for her “bravery, integrity and excellence in Journalism.” That same year, she was also chosen as one of the 100 Most Influential Filipina Women in the US by the Filipina Women’s Network.

Still connected to her roots

Espinosa was born and raised in Bacolod City and still considers it her home even though she has lived in the San Francisco Bay Area for 10 years now. She is the eldest child of Henry and Ninfa Espinosa. She finished her elementary and high education at St. Scholastica’s Academy-Bacolod, and her Bachelor of Arts in Broadcast Communication at the University of the Philippines Diliman (Class of 1999).

“But he always knew that my passion was to be a reporter and he is fine with that,” Espinosa says.

Now, even separated by an ocean from her family in Bacolod City, she still feels connected to them whenever she is in front of a camera.

“As a reporter, “ she explains, “you have to have a sense of connection to your audience. When I report, I talk to the camera as if I’m talking to a friend or to someone, instead of just talking to a camera, so your audience receives it as that person is talking to me directly.” And she is always aware that in front of a television somewhere 8,000 miles away, her parents and siblings are watching her, and she finds connection and comfort in that.

“Every day, you go to work and say, ‘There’s another story to be told.’ That’s what keeps me going.”

Now, even as this small-town girl with big dreams considers winning an Emmy as a pretty good indicator that she “has arrived,” Espinosa strives to tell the stories of those whose stories no one seems to listen to. There is no doubt that Henni Espinosa will continue to soar to new heights, always inspired by her parents’ words many years ago as they sent her off from a small town in the Philippines: Fly, wherever your dreams take you. Fly.