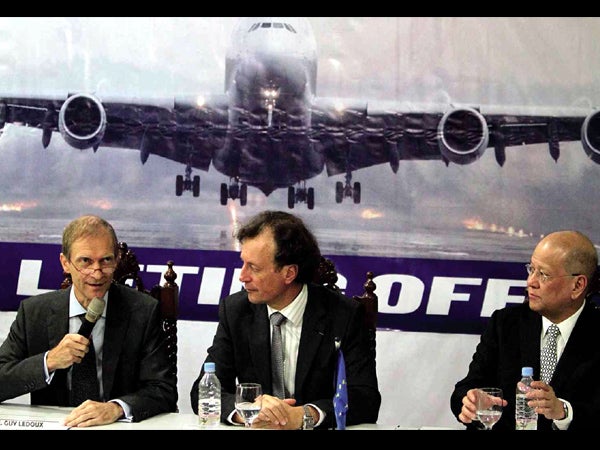 EU Ambassador Guy Ledoux (left), head of the delegation of the European Union to the Philippines, announces to the press on Wednesday, July 10, 2013, that Europe will be open again to Philippine Airlines. The European Union, also on Wednesday, announced it was allowing Venezuela’s Conviasa back into European airspace on the grounds of improved safety and compliance with EU regulations. GRIG C. MONTEGRANDE

BRUSSELS—The European Union on Wednesday allowed carriers Philippines Airlines and Venezuela’s Conviasa back into European airspace on the grounds of improved safety and compliance with EU regulations.

The EU executive, the European Commission, removed the two from a blacklist—the EU air safety list—after slapping an operational ban on the Filipino flag-carrier in 2010 and on Conviasa in 2012.

The decision to lift the bans was an element of the EU’s updated list which now leaves 280 airlines from 20 states still barred from flying in the EU.

“Today we confirmed our willingness to remove countries and airlines from the list if they show real commitment and capacity to implement international safety standards in a sustainable manner,” said the EU’s Transport Commissioner Siim Kallas.

Earlier in Manila, EU ambassador Guy Ledoux said Philippines Airlines will be allowed to fly into the 28-member bloc from Friday, which will spur tourism and business links.

“This is a tremendous achievement in such a short period of time,” Ledoux said.

He added that the EU would conduct further reviews so other Philippine carriers would also be able to fly to Europe as well.

“This decision is very encouraging and is the first success of CAAP (Civil Aviation Authority of the Philippines) and Philippine Airlines,” he told reporters.