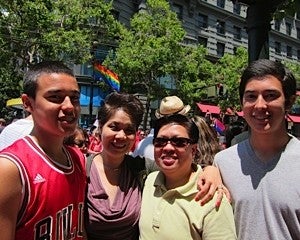 Shirley and Jay Mercado (2nd and 3rd from left) and their twin sons Jashley and Joriene joined over a million people at the San Francisco Pride Parade on June 30, 2013, to celebrate the Supreme Court decisions on same sex marriage.

SAN FRANCISCO—Darwin Dayan and his husband, Deo Patrimonio-Martin, who have been together for 18 years and wed five years ago, screamed with delight when they heard that DOMA had been struck down.  Their union in 2008 remains valid because they luckily wed during the brief period when same-sex marriage was legal in California.

The United States Supreme Court on June 26, the last day of its session this term, issued two stunning decisions on same-sex marriage that were heard around the world.

It overturned the Defense of Marriage Act’s (DOMA) federal ban on same- sex marriage as unconstitutional, thus allowing married same-sex couples in states where same sex-marriage is legal to receive federal benefits. The highest court of the land also ruled that proponents of California’s Proposition 8, banning same-sex marriage, had no standing or right to appeal the district court’s ruling that the initiative violated the state Constitution, thus facilitating the resumption of same-sex marriages in the country’s most populous state.

Like Dayan and Patrimonio-Martin, other members of the Filipino LGBT community were elated by these historical rulings, which brought them a step closer to achieving full equality.

Dayan welcomes the ruling, which not only recognizes their marriage on the federal level, but also makes it easier for him and Patrimonio-Martin, a pharmacist, to handle their estate and file taxes like any straight couple. Dayan, a consultant for a human resources firm in San Francisco, has had a long history of activism in the LGBT community. In the 1990s, he served as co-chair of the board of directors of the Gay Asian Pacific Alliance and the Filipino Task Force on AIDS.

Jay and Shirley Mercado, who are advocates for marriage equality and the comprehensive immigration reform bill, were watching the morning news on TV when they heard the Supreme Court decisions.

“We jumped for joy, tears in our eyes, and could not believe what we were hearing,” Jay Mercado recalls. Jay, who works in the insurance industry, and Shirley, who manages a day care center at their home, have been together for 27 years and married in San Francisco in 2004 when same sex-marriage was legal for a few months in California.   However, the passage of Proposition 8 in 2008 invalidated their union. The Mercados have 16-year-old twin sons, Jashley and Joriene.

Jay says, “The decisions brought our family honor and dignity, and now we do not have to worry about Shirl’s immigration status in the future.”  The Department of Homeland Security has already issued an official statement confirming that in view of the DOMA decision immigration visa petitions may now be filed on behalf of a same-sex spouse in the same manner as an opposite-sex spouse. Mercado, who is a US citizen, will be able to file a petition for US residency for her wife, Shirley. 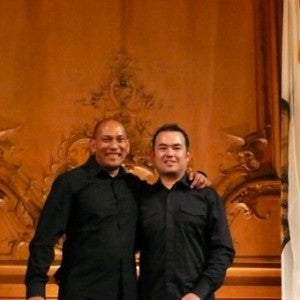 Darwin Dayan (left) and Deo Patrimonio Martin at San Francisco City Hall after their wedding on June 20, 2008, when same-sex marriage was still legal in California. They lauded the Supreme Court decisions on DOMA and Proposition 8, affirming their union.

The Supreme Court’s decisions will have far-reaching effects throughout the rest of the country. The demise of DOMA paves the path for legal challenges against the remaining 37 states that still ban same-sex marriage. But the Court ruling, which only allows federal benefits to married same-sex couples that reside in states that allow such unions, still poses a real dilemma for couples that decide to move to states that do not allow them.

The Supreme Court’s decision on California’s Proposition 8, which was based on technicality rather than its constitutionality, also promises to trigger a tsunami of lawsuits from same-sex couples living in those 37 states. Though the Court fell short of declaring a sweeping endorsement of same-sex marriage in the two cases, it is clear that the country would never be the same again.

As same-sex marriage is now legal in 13 states, including California and the District of Columbia, 30 percent, or about one-third of the country’s population, now lives in states where same-sex marriage is allowed.  David Boies, a lead attorney in the challenge to Proposition 8, said in a statement published in the San Francisco Chronicle, “The principles the court articulated today mean that we are going to have marriage equality in all 50 states. It’s just a question of time now.”

Nevertheless, the LGBT community and its supporters are aware that there is still lot of work ahead. Anti-same-sex marriage groups and individuals, including Republican politicians like Senator Lindsey Graham of South Carolina, have vowed to continue their crusade against marriage equality. Graham was quoted as declaring, “Today’s Supreme Court ruling will not change South Carolina law, and I will continue to fight for and defend the traditional definition of marriage.”

In view of this polarizing political landscape, Jamie Manson, an award-winning columnist for the National Catholic Reporter, issued a cautionary tale. Manson stated, “If right-wing lawmakers are successful in restricting voter eligibility among the disenfranchised, LGBT civil rights will be as vulnerable as government entitlement, civil liberties, collective bargaining and protections for immigrants.”

Manson notes that a mere 24 hours before announcing the same-sex marriage decisions, the Supreme Court gutted a key provision of the Voting Rights Act that had subjected states that have historically practiced racial discrimination and want to amend their voting laws to strict scrutiny.

Manson says, “The fight against voter suppression laws and the fight for LGBT rights share some deep connections. At the most fundamental level, both are civil rights battles for equal protection under the law.”

Thelma Estrada, a San Francisco attorney and Filipino community activist, agrees with Manson. Estrada, who is the current president of a local union of attorneys and a longtime supporter of gay rights, states, “The struggle of the LGBT community for equal protection under the law is part of the civil rights struggle. Just as we demand for equality for gay rights, we should also demand for equality at the voting booth. We need to affirm our commitment to fight discrimination of any kind.”

Fighting for equality is something that the Mercados, Dayan and many members of the Fil-Am LGBT community have shown they could do very well. They campaigned tirelessly against Proposition 8 and supported the battle for marriage equality by fundraising, making speeches, joining rallies and lobbying Congress. While pledging to continue the struggle for LGBT rights, they also see the need to defend other civil rights issues.

Jay Mercado says, “The LGBT and other communities should fight for any issues that will make us all equal.” Dayan echoes Mercado, stating, “As minorities, we need to watch out for laws and edicts that affect each of us. That’s why it’s often perplexing to me when people of color would make homophobic comments or be against marriage equality when we are all fighting for fairness and equality under the law.”