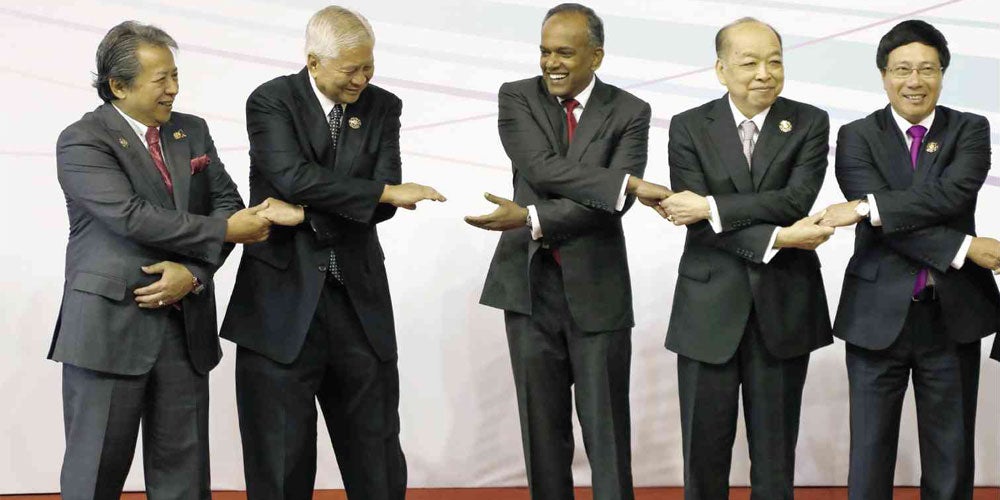 The Philippines on Sunday accused China of a “massive military buildup” in the disputed West Philippine Sea (South China Sea), warning a Southeast Asian security forum that Beijing’s tactics were a threat to peace in the region.

Following the harsh rhetoric of Foreign Secretary Albert del Rosario, China agreed to hold formal talks with the Association of Southeast Asian Nations (Asean) on a proposed code of conduct to ease tensions in the West Philippine Sea.

Speaking at the 46th Asean ministerial meeting in Brunei, Del Rosario said China’s “increasing militarization” of two shoals in the West Philippine Sea was a violation of the Declaration of Conduct in the sea that the 10 members of the bloc signed with Beijing in 2002, agreeing not to cause tensions in the area.

His rebuke came a day after the Chinese newspaper People’s Daily warned that a “counterstrike” against the Philippines was inevitable if it continued to provoke China in the West Philippine Sea.

Friction between the two countries over disputed shoals—Panatag (Scarborough Shoal) and Ayungin (Second Thomas Reef)—in the sea rich in gas and oil deposits has surged since last year due to China’s increasing aggressiveness in asserting its ownership of territory in the strategic waterway.

Asean has been trying to persuade Beijing to join talks on a proposed code of conduct this year, but China’s naval action has alarmed some members of the bloc, particularly the Philippines and Vietnam.

Until Sunday, China had appeared in little hurry to begin negotiations with Asean, saying it would do so “when the time is rife.”

In a talk with reporters following a meeting of Asean foreign ministers, Chinese Foreign Minister Wang Yi said Beijing agreed to hold “official consultations” on the proposed code of conduct governing naval actions at a meeting with the bloc in China in September.

The two sides had already agreed to hold the foreign ministers’ meeting, which will follow a special Asean ministers’ gathering on the West Philippine Sea disputes in Thailand in August.

“We agreed to maritime cooperation to make our surrounding sea a sea of peace, friendship and cooperation,” Wang told reporters.

Besides the Philippines and Vietnam, Brunei, Malaysia and Taiwan claim territories in the West Philippine Sea.

China claims nearly all the sea, even waters along the coasts of neighboring countries.

Most recently, the Philippines has accused China of encroaching on its territory after three Chinese ships converged just 9 kilometers from Ayungin Shoal, where Manila maintains a small military force.

Last week, the Philippines sent fresh troops and supplies to Ayungin, which is within the country’s 370-km exclusive economic zone.

China, which does not recognize the zone, condemned it as an “illegal occupation.”

A front-page commentary published last week in the People’s Daily, the official newspaper of China’s Communist Party, also accused the Philippines of inviting foreign capital to engage in oil and gas exploration on Recto Bank, in Manila’s part of the Spratly islands in the West Philippine Sea.

The commentary also accused the Philippines of resorting to many “unscrupulous” tricks in the sea, possibly referring to Manila’s taking its dispute with Beijing over Panatag Shoal to the United Nations for arbitration.

“We reiterate our continued advocacy of a peaceful and rules-based settlement of dispute in accordance with universally recognized principles of international law,” Del Rosario countered in his speech to the Asean foreign ministers’ meeting on Sunday.

He said Manila was seeking a clarification of maritime entitlements in the arbitration case against Beijing under the United Nations Convention on the Law of the Sea (Unclos).

But the legal tack the Philippines has taken against China “does not constitute abandonment of diplomatic avenues,” Del Rosario said.

“We continue to exert efforts to move forward and enhance our relations with China on the basis of mutual respect and sovereign equality. Neither does the case diminish our zeal to pursue a binding code of conduct,” he said.

The People’s Daily commentary set the tone for the Asean security forum and drew the Philippine condemnation of the Chinese threat.

“The statement on counterstrike is an irresponsible one. We condemn any threats of use of force,” Del Rosario told reporters following a meeting of the Asean diplomats.

He said the ministers had discussed China’s “illegal occupation” of Panatag Shoal, which is just 230 km from the coast of Zambales province.

China seized the shoal after a maritime standoff with the Philippines that lasted more than two months last year, forcing Manila to take the dispute to the United Nations for arbitration.

Malacañang said Sunday that the government should not take lightly the Chinese threat of a counterstrike in the West Philippine Sea.

Secretary Herminio Coloma of the Presidential Communications Operations Office said the government should remain “vigilant” in protecting the country’s sovereignty in the face of China’s threat.

“We can’t be complacent. That’s the highest priority: protection of sovereignty,” Coloma said.

President Aquino is leading ceremonies on Monday marking the 66th anniversary of the Philippine Air Force in Clark, Pampanga, where he is expected to speak again on the Philippines’ territorial dispute with China in the West Philippine Sea, Coloma said.

The Asean foreign ministers also hope this year’s meeting will provide a chance for North Korea and its neighbors to discuss restarting long-dormant disarmament talks on Pyongyang’s nuclear weapons program.

The disarmament-for-aid talks hosted by Beijing have been stalled since 2008.

“We emphasized the importance of dialogue aimed at promoting mutual understanding and confidence among all parties concerned with ensuring peace, security and stability on the Korean Peninsula,” the Asean diplomats said in a joint statement.

“In this regard, we recommend that the (regional forum), where all six members to the six-party talks are also participants, could contribute to forging a conducive atmosphere for the resumption of the six-party talks,” they said.

Still, it is not clear whether North Korea will hold informal talks with the United States or South Korea on the sidelines of the forum.

The governments in Seoul and Washington have said they have no immediate plans to meet privately with Pyongyang.

The Asean meeting will expand Monday and Tuesday to include the United States, China, Japan, Russia and other countries across the Asia-Pacific region, providing the platform for face-to-face diplomacy on many of the world’s hot-button issues.

US Secretary of State John Kerry is expected to hold a series of rapid-fire meetings with his counterparts from the world’s major powers, including Russia’s Sergei Lavrov and China’s Wang Yi.

Japanese Foreign Minister Fumio Kishida and his South Korean counterpart, Yung Byung-se, are also set to hold direct talks in Brunei, the first ministerial meeting between the two countries under their new governments.—With reports from TJ A. Burgonio, AP and AFP