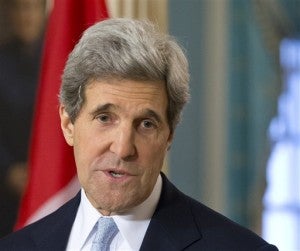 MANILA, Philippines—The Philippines retained its Tier 2 status in the United States’ annual Trafficking in Persons (TIP) Report as US authorities noted a “paucity of arrests and convictions” despite the country’s strong resolve to arrest trafficking incidents.

In a report released in Washington D.C. on Wednesday, the US Department of State said the Philippines had failed to comply with standards for curbing trafficking, particularly with the country’s poor judicial system.

“As both a source country and, to a lesser extent, a destination and transit country for sex trafficking and forced labor, the Philippines remained at Tier 2 on the state department’s three-tier ranking system. Despite making significant efforts to combat trafficking, the government of the Philippines does not yet fully comply with the minimum standards for the elimination of trafficking,” the TIP report said.

The report, released by Secretary of State John Kerry on June 19, is considered “the most comprehensive report” on efforts of the world’s governments to stop human trafficking.

The Philippines was first upgraded to Tier 2 in June 2011, considered an improvement after the country’s initial convictions of individuals involved in human trafficking. It had been at risk of being downgraded to Tier 3, which would have led to sanctions on US aid to the Philippines.

In retaining the country at its current rating, the state department noted the Philippines’ “weaknesses in its judicial system,” saying this “stymied efforts to hold trafficking offenders accountable, and the overall number of prosecutions and convictions remained disproportionately low for the size of the problem.”

“It enacted amendments to its antitrafficking legislation that could facilitate prosecution of a wider range of cases, but the excessive length of trials and lack of public prosecutors dedicated to trafficking cases continue to limit progress,” read the report.

The report further cited the “serious problem” of child trafficking in the country, particularly in cyber pornography.

The US state department urged the Philippines to “develop and implement programs aimed at reducing the demand for commercial sex acts, including child sex tourism.”

Still, the United States lauded the Philippines’ efforts to score points against traffickers, particularly steady funding for the country’s Inter-Agency Council Against Trafficking (Iacat), the frontline body to combat the illegal trade.

“The government sustained its levels of funding for Iacat at the equivalent of approximately $1.2 million in 2012 and continued efforts to implement antitrafficking laws and policies at the national, regional and provincial levels,” read the report.