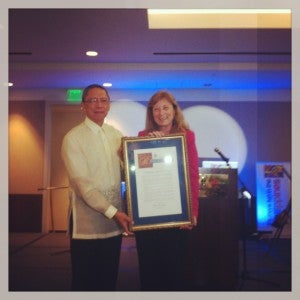 The state Senate also made a  “special recognition of California’s Filipino American citizens” and thanked them for their “countless contributions to our nation’s cultural, economic and political heritage.”

“I thank my Senate colleagues, both Democrats and Republicans, for supporting SCR 47 today to honor Philippine independence, as well as the thriving Filipino-American community in California,” Senator Corbett said.

“The 10th State Senate District is home to tens of thousands of Filipino-Americans that contribute to the diversity of our state, in fields such as government, medicine, business and education.  Visiting Naga City in the Philippines as Mayor of San Leandro during a Sister City trip helped me appreciate even more the strong connection between our East Bay communities and the beautiful island nation of the Philippines.  I greatly appreciate their rich history and traditions that live on in California today.”

Many Filipino-Americans continue to make an indelible mark on life in California, including several individuals that live and work in the 10th State Senate District.  Some of those community leaders include: