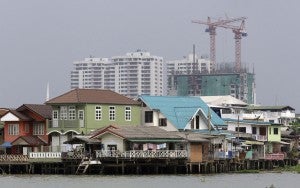 In this March 26, 2012, file photo, residences on stilts sit along the Chao Phraya River with a construction site in the background in Bangkok, Thailand. Sea level rise projections show Bangkok could be at risk of inundation in 100 years unless preventive measures are taken. AP PHOTO/SAKCHAI LALIT

BONN, Germany—From Bangkok to Miami, cities and coastal areas across the globe are already building or planning defenses to protect millions of people and key infrastructure from more powerful storm surges and other effects of global warming.

Some are planning cities that will simply adapt to more water.

But climate-proofing a city or coastline is expensive, as shown by New York Mayor Michael Bloomberg’s $20-billion plan to build floodwalls, levees and other defenses against rising seas.

The most vulnerable places are those with the fewest resources to build such defenses, secure their water supplies or move people to higher ground. How to pay for such measures is a burning issue in UN climate talks, which just wrapped up a session in the German city of Bonn.

The following is a sampling of cities and countries around the world and what they are doing to prepare for the climatic forces that scientists say are being unleashed by global warming.

Even before the consequences of climate change became evident, scientists were well aware that Bangkok—whose southern suburbs border the Gulf of Thailand—was under serious threat from land subsidence.

Sea level rise projections show Bangkok could be at risk of inundation in 100 years unless preventive measures are taken. But when Thailand’s capital and its outskirts were affected in 2011 by the worst flooding in half a century, the immediate trigger was water runoff from the north, where dams failed to hold very heavy rains.

Industrial areas in the capital’s suburbs, housing important businesses, were devastated. So the focus was put on a short-term solution for that area.

The government recently announced winning bids totaling $9.38 billion by Chinese, South Korean and Thai firms to run the flood and water management schemes, including the construction of reservoirs, floodways and barriers.

Solutions to the problem of rising seas are still being studied.

“Construction alone is not sustainable,” says Seree Supratid, director of a climate and disaster center at Rangsit University. “People have to adapt to nature. For example, you know Bangkok will be flooded by the rising seas in the next 100 years, then you have to learn to build your houses in a way the floodwater cannot reach it, putting it up high or something.”

A low-lying delta nation of 153 million people, Bangladesh is one of Asia’s poorest countries and one that faces extreme risks from rising sea levels. Its capital, Dhaka, is at the top of a list of world cities deemed most vulnerable to climate change.

The World Bank says a sea level rise of 14 centimeters would affect 20 million people living along the country’s 710-kilometer coast. Many of these people would be homeless.

Bangladesh is implementing two major projects worth $470 million that involve growing forests on the coastal belt and building more multistory shelters to house people after cyclones and tidal surges.

“Bangladesh is opting for adapting to the climate change impacts as the world’s developed nations are not doing enough to cut down carbon emissions,” said Forest and Environment Minister Hasan Mahmud.

Miami in Southern Florida is one of those places that show up as partially under water in many sea level projections for this century. So it’s no surprise local leaders are seeking ways to adapt.

Four counties have collaborated on a regional plan to respond to climate change. Their overarching goal: keeping fresh water inland and salt water away.

The first action plan calls for more public transportation, stemming the flow of seawater into freshwater, and managing the region’s unique ecosystems so they can adapt.

The counties reviewed regional sea level data and projected a rise of 23 to 61 cm in the next 50 years along a coastline that already has documented a rise of 22.8 cm over the last 100 years.

New York City Mayor Michael Bloomberg last week announced one of the most ambitious plans for defending a major US city from climate change.

Recommendations range from installing removable flood walls in lower Manhattan to restoring marshes in Jamaica Bay in Queens, and from flood-proofing homes to setting repair timeframe standards for phone and Internet service providers.

In lower Manhattan, a removable system of posts and slats could be deployed to form temporary flood walls. The height would depend on the ground elevation and potential surge.

Projects also include a levee to guard part of Staten Island, building dunes in the Rockaways, building barrier systems of levees and gates to bar one creek from carrying floodwaters inland, and possibly creating a levee and a sizeable new “Seaport City” development in lower Manhattan.

The low-lying capital of a perpetually soggy country, London has long been vulnerable to flooding—particularly when powerful storms send seawater racing up the River Thames.

But Londoners already have a powerful flood defense: the half-a-kilometer-long Thames Barrier, composed of 10 massive steel gates, each five stories high when raised against high water.

Some have called for Thames Barrier—in operation since 1982—to be replaced or supplemented by an even more ambitious flood defense system farther down the river. But Britain’s Environment Agency says the defenses should hold until 2070.

Meanwhile, environmentally conscious Londoners have made plans to battle some of the other predicted effects of global warming by promoting better water management, expanding the city’s Victorian sewage network, and “urban greening”—the planting of trees and rooftop gardens to help manage the urban heat island effect.

In The Netherlands where two-thirds of the population live below sea level, the battle against the sea has been a matter of life and death for centuries.

The Dutch government devotes roughly 1 percent of its annual budget to its intricate system of dikes, dunes and sea walls. Improvements to cope just with the effects of climate change have been carried out since 2003—though planning began well before that.

The focus in the 20th century was on a spectacular series of sea defenses, including massive steel and concrete barriers that can be quickly moved to protect against storm surges.

But current techniques embrace a philosophy of “living with water”: Floods are inevitable, and it’s better to prepare for them than to build ever-higher dikes that may fail catastrophically.

Thousands of waterways are being connected so the country can essentially act as one big sponge and absorb sudden influxes of water. Some areas have been designated as flood zones. Houses that can float have been a building sensation.

Along the coast, the country has been spouting huge amounts of sand in strategic locations offshore and allowing the natural motion of waves to strengthen defensive dunes.

Sea level rise is a particular concern for this flood-prone city. It’s in the process of realizing an expensive and oft-delayed system of underwater barriers that would be raised in the event of flooding over 110 centimeters.

Venice, a system of islands built into a shallow lagoon, is extremely vulnerable to rising seas because the sea floor is also sinking.

The constant flooding puts the city’s considerable architectural treasures at risk. Venice has experienced 10 events over 140 cm since 1950.

Plans for the new so-called Moses barriers will cost more than 4 billion euros ($5.3 billion). Many Venetians remain skeptical of the project due to the high costs and concerns over environmental risks.

The Maldives, an upmarket beach paradise for tourists, has also become a symbol of the dangers of climate change.

Made up of hundreds of islands in the Indian Ocean, it’s one of the most low-lying nations in the world, and exceptionally vulnerable to rising seas.

Some scientists have said the Maldives could disappear within decades. While other researchers say those fears may have been overblown, the country is taking measures to protect itself.

A seawall was built around the capital, Male, after flooding in the 1980s. That wall protected the city from the worst effects of the devastating 2004 tsunami, which temporarily put large swaths of the country under water.

Maldives is also creating new land through land reclamation, expanding existing islands or building new ones, to ease overcrowding. The reclaimed land is being elevated to better withstand rising seas.

Officials in Cuba recently finished a study of the effects of climate change on this island’s 5,630 km of coastline, and their discoveries were so alarming they didn’t immediately share the results with the public to avoid causing panic.

According to the report, rising sea levels would seriously damage 122 Cuban towns or even wipe them off the map by 2100. Scientists found that beaches would be submerged while freshwater sources would be tainted and croplands rendered infertile.

Those frightening calculations have spurred systemic action in Cuba, the largest island in the Caribbean and one heavily dependent on beach-loving European and Canadian tourists.

In recent months, demolition crews have begun fanning out across the island with plans to raze thousands of houses, restaurants, hotels and improvised docks in a race to restore much of the coast to something approaching its natural state.