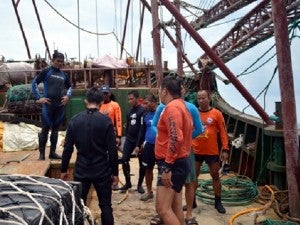 This undated handout photo received on April 10, 2013, and released by the Philippine coast Guard (PCG) shows coast guard personnel inspecting the Chinese fishing vessel which ran aground off Tubbataha reef in Palawan island, western Philippines. The 12 Chinese nationals arrested for the alleged poaching in April will not be deported until after their case has been terminated or they have served their sentence, the Bureau of Immigration said Wednesday, June 12, 2013. AFP FILE PHOTO

MANILA, Philippines—The 12 Chinese nationals arrested for alleged poaching at Tubbataha Reefs Natural Park in April will not be deported until after their case has been terminated or they have served their sentence, according to the Bureau of Immigration.

Ma. Antonette Mangrobang, spokesperson for the immigration bureau, said on Wednesday that a deportation order had been issued for the 12 Chinese, who were “undocumented,” but they must “remain detained” until the order could be implemented.

Mangrobang said the suspected poachers would be turned over to the immigration bureau only if they would be released on bail.

Marine park rangers arrested the 12 Chinese when their vessel ran aground on an atoll at Tubbataha in early April.

A search of the vessel yielded a large cargo of frozen pangolin meat, believed bound for China’s exotic-food market.

The pangolin, or anteater, is an endangered species. It is protected by Philippine and international laws.

The authorities seized the pangolin meat, and the Tubbataha Reefs management brought poaching charges against the 12 Chinese nationals in Puerto Princesa City in Palawan province, from where the World Heritage Site in the middle of the Sulu Sea is administered.

Palawan Provincial Prosecutor Allen Ross Rodriguez said his office had received an order from the immigration bureau for the turnover of the suspected poachers for deportation proceedings.

Rodriguez said the order was received at his office on Tuesday.

In a letter dated June 6, Immigration Commissioner Ricardo David Jr. advised Judge Ambrosio de Luna of the 51st Branch of the Regional Trial Court in Puerto Princesa that the immigration board had issued a summary deportation order for the 12 Chinese nationals.

A copy of the letter was provided to the Inquirer yesterday.

“Accordingly, in the event that the 12 Chinese nationals [are] ordered released on bail for whatever reason, we are respectfully requesting that they be turned over to the Bureau of Immigration,” David said.

David made it clear that while the immigration bureau was requesting to be given legal custody of the suspected poachers, physical custody of them should remain with the provincial jail pending resolution of their case.

Prior to the immigration bureau’s clarification, environmental lawyers collaborating in the prosecution of the 12 Chinese opposed the turnover of the suspected poachers, as charges had already been filed against them in the Puerto Princesa court.

Rodriguez said the prosecution moved for a hold-departure order when it brought poaching charges against the 12 Chinese.

The court, however, has yet to resolve the motion.

Mangrobang clarified that the 12 Chinese would not be deported during the pendency of their case.

“They will not be deported unless the case against them is terminated or after they have served their sentence,” Mangrobang said.

The grounding of their vessel at Tubbataha damaged corals in the protected marine park, famous the world over for its vast biodiversity, rivaling even Australia’s Great Barrier Reef.

It was the second destructive grounding at Tubbataha this year, coming three months after a US Navy minesweeper, the USS Guardian, ran aground on an atoll there in January.

The Guardian had to be broken up and removed piece by piece to save the reef from further damage.

The US Navy is paying compensation for damage to nearly 3,000 square meters of the corals and is helping Philippine environmental authorities and scientists in the rehabilitation of the reef.

In the case of the 12 suspected poachers, however, it is not clear who will be held accountable for the damage to the reef, as the vessel is owned by a private operator.

There are no reports from Beijing on whether China has identified or located the vessel’s owner.—With a report from Redempto Anda, Inquirer Southern Luzon