Tales from the deep: Fil-Am steers US submarine home 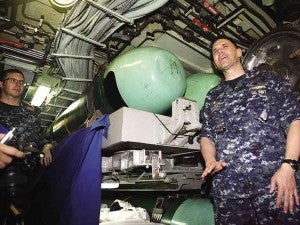 Cmdr. Douglas Bradley shows some of the torpedoes of the US Navy’s attack submarine USS Asheville, which is docked at the Subic Bay Freeport. MARIANNE BERMUDEZ

SUBIC BAY FREEPORT—Coming home to the land of his mother was a longtime dream of Lt. Vincent Mejia.

When he finally did so, it was doubly joyful for the Filipino-American sailor who was tasked to steer to port one of the US Navy’s most advanced attack submarines after it had surfaced.

“The most exciting was being able to drive the sub back to my homeland. It’s been a dream my entire life to come home,” said Mejia, 24, born and raised in the United States but whose mother hails from Pangasinan.

“I would have never thought I would come back here and drive the ship to port,” said Mejia, who spends most of his days doing paperwork but also gets to serve as the sub’s helmsman, steering the vessel from time to time.

Mejia is among a handful of Filipino-American sailors on their first Navy deployment aboard the USS Asheville, a submarine that docked here last weekend on a routine port call as part of its six-month Western Pacific deployment.

Nicknamed “The Ghost of the Coast,” the 110-meter fast-attack submarine has been in service since 1991 and is the fourth Navy ship to be named after the North Carolina city, known to have a long maritime history.

‘Ghost of the Coast’

The first Asheville was a patrol gunboat stationed in the Philippines during the Japanese attack on Pearl Harbor in 1941.

Homeported in San Diego, the gas-powered, 6,900-ton Los Angeles class sub is at sea “in support of maritime security operations in international waters,” according to the Navy. With a top speed of 32 knots (around 60 kilometers per hour), the vessel is capable of sub-to-sub and sub-to-surface ship warfare, intelligence, surveillance and reconnaissance, armed with tomahawks and torpedoes.

The Asheville arrived on Saturday for routine resupply, refueling and rest and recreation stop for its crew, tethered to the USS Frank Cable, the 7th Fleet’s mobile repair and support platform that arrived here the day before. The submarine, which last visited the Philippines in 2000, was scheduled to leave Thursday while the Frank Cable is expected to remain in Subic to service other US ships.

The arrivals are among a string of port visits of US vessels, a sign of steady defense ties between the Philippines and the US despite an early hitch this year, when the warship USS Guardian ran aground and damaged the treasured Tubbataha Reefs Natural Park in January.

The Guardian was dismantled and removed from the reef after more than two months. The US has vowed to fully compensate the Philippines for the damage and provide long-term assistance for coastal protection programs here.

For Mejia and his fellow Filipino-American crewmen, the Asheville’s five-day visit was a rare chance to see the country they also consider home.

Laguna native Seaman Brian Santos, 21, followed in his father’s footsteps in the Navy but opted to try service below the surface.

“My dad is in the Navy [serving] on a surface ship. I guess I wanted to experience the other side,” said Santos, whose family left the Philippines for the US when he was 13. He handles the ship’s critical fire or weapons control system.

Life fathoms below was a choice for the Asheville’s 150 crewmen: Everyone volunteered, none were assigned. And the sacrifice of being a shadow in the deep—of months without sunlight, of no contact with friends within a crammed space—is a matter of pride for the sailors, especially their commanding officer.

“This is their (Filipino-American crewmen) first sea tour but they can go anywhere, they can do many number of different things,” said Cmdr. Douglas Bradley, a decorated sailor of 20 years.

“The crew is the best and the brightest in the US Navy. They are mostly math and science degree holders. Everybody volunteered. They want to be here. No other job gives you such responsibility in a short period of time,” said Bradley, whose command of the Asheville is his first.

The bond among Asheville’s sailors is as tight as its spaces—a brotherhood that marks the difference between submarine and surface lives in the US Navy, Bradley said.

Unlike warships and aircraft carriers, for instance, where staff complement could run up into thousands, ship life down below is a family affair.

“I think that’s part of the family atmosphere that we have here. Everybody knows each other, unlike a surface ship. Everybody is important. Everybody has a job to do that needs to be done. We depend on each other,” Bradley told reporters given a rare tour of the submarine.

Sailors take turns serving three six-hour shifts. As the ship operates across a spectrum of depths and time zones, the submarine seems to have a clock all its own.

“It’s something we get accustomed to. We cycle the lights on and off: on, when it’s daytime (up the surface), and off, when it’s nighttime. And when we come to port, we reset our body clock,” Bradley said.

Sailors also keep a tight watch of the ship’s own atmosphere control system, which creates the vessel’s own oxygen out of water and expels harmful gases, such as carbon monoxide.

The three-deck submarine may be bigger than a wide-body aircraft but with everything that is packed aboard, there is limited space to go by within the ship’s 10-meter width (because of the ship’s spatial layout and limits, the Asheville’s crew is an all-male lot).

Sailors who serve are all tested for mental endurance in such confines—which may be claustrophobic for some—and all are prepared to redefine the bounds of personal space once they enter the sub’s hatch.

Hallways would find the submariners walking sideways, chest to chest on busy hours. In berthing areas, sailors sleep on bunk beds more akin to shelves rather than decks, all in layers of three, and the spaces beneath their beds serve as lockers.

Over at the torpedo tubes, a deck below the sleeping quarters, the ship’s cook finds his nightly slumber beneath the 21-foot torpedoes themselves, his cushion set in the space between the 1.6-ton weapons and the floor.

The laundry room, shared by all 150 personnel, is no bigger than a plane’s typical lavatory.

The captain’s room—the largest single room on the ship—is hardly a luxury. It’s as wide as Bradley’s arms extended end to end, only enough for him to stretch his legs on a bed that converts into an office during his waking hours.

The mess hall, the biggest common room that doubles as a function area for mission briefings, sits only up to 30 people.

“Eating is not a social thing. You get it and go. Get your nutrition and move on,” Bradley said in half-jest.

But it is this space that cultivates the sub’s sense of community where the entire crew is one big clique, said Mejia, who admits to missing the sunlight.

“Being down here, in such a small space, we become a family. We are just one clique. It’s more family-oriented than in other ships, based on what I’ve heard,” Mejia said.