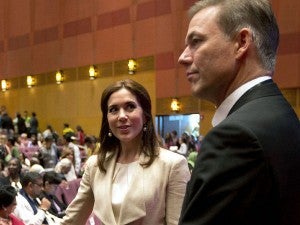 Denmark’s Crown Princess Mary talks with the Danish Ambassador to Malaysia Nicolai Ruge as they wait for the start of the Women Deliver conference in Kuala Lumpur, Malaysia, Tuesday, May 28, 2013. The three day conference will focus on the health and empowerment of girls and women and ensuring their rights remain top priorities now, and for decades to come. AP

MANILA, Philippines—Impressed with the Philippines’ reforming political and business climate, the Danish government is keen on  boosting trade with the country and is eyeing to complement its honorary consulates here with “a more permanent presence.”

Danish Ambassador-designate Nicolai Ruge cited a growing interest among Danish investors in doing business in the Philippines in the wake of the country’s steady economic growth  and credit-rating upgrades.

“We have an eye for the fact that the Philippine economy is growing and the positive sentiments about the political development, so now we’re looking at what are the options for establishing some kind of presence. If not a full-fledged embassy, if we’re not sure we have the resources to maintain that, at least we’re looking at establishing a trade office,” Ruge said.

He made the statement in an interview on the sidelines of the commemoration of Denmark’s Constitution Day in Makati City last Wednesday.

Ruge said the prospect of expanding Danish presence here is another step in enhancing Denmark’s engagement in the Philippines following the establishment of a new honorary consulate in Davao City.

Denmark closed its embassy here under a cost-cutting scheme in 2002 and takes care of its ties with Manila through honorary consulates, the first two being posts in Manila and Cebu.

Ruge, Denmartk’s ambassador-designate to the Philippines and current Ambassador to Malaysia, flies in periodically from the Danish Embassy in Kuala Lumpur, through which Denmark oversees its affairs with the Philippines. The envoy said he will relay this renewed Danish interest in the Philippines when he presents his credentials to President Aquino on Monday.

“We at the Danish Ministry of Foreign Affairs are exploring the option of establishing a more permanent presence in the Philippines,” said Ruge during remarks at the event, attended by diplomats, government officials and other guests.

“In a time where financial prudence and restraint is warranted, it is not likely to be a full-fledged embassy again, but possibly a light presence focused on the activities of the Danish Trade Council, which is an integrated part of the Ministry of Foreign Affairs. In any case, it is a clear sign of the increased commercial and political interest in the Philippines,” he added.

Ruge said the Danish government and the Confederation of Danish Industries is planning to send a trade mission to the Philippines within the year, a followup to a trade and investment seminar held here in January.

“This would offer companies that are not yet familiar with the country an important opportunity to get a hands-on feeling for the market and to meet key people and institutions,” said Ruge.

“It is not a new market for Danish companies and trade is already significant. But with the impressive and very positive governance and economic developments that the Philippines have been undergoing in recent years, it only becomes more interesting,” the envoy said.

Of particular interest is the country’s workforce, which Ruge said is strong in business English and could be tapped for Danish expansion in the business process outsourcing industry. Danish firms are also keen on targeting the country’s growing middle class market, which may take a liking to more expensive yet higher quality Danish consumer products.

“The Philippines hopes to further improve its relations with Denmark, first by increasing trade and investment between the two countries,” Yabes said.

The Philippines also does not have a  resident ambassador in Denmark but maintains an honorary consulate general in Copenhagen under the Philippine embassy in Oslo.

Over 1,600 Filipino seafarers work on Danish vessels, a population on top of the 10,000 Filipinos living and working in Denmark, Yabes said. There are at least 700 Danes in the Philippines.

Read Next
Hero dog Kabang returns home from US
EDITORS' PICK
Cherry Mobile teams up with Cloud Panda PH, launches online store
Philippines’ COVID-19 cases accelerate to 18,638
‘Puno na lahat:’ Metro workers brave lack of public transport, rains on Day 1 of GCQ
Leveling up your ‘lutong bahay’ with the kitchen companion you never knew you needed
Duterte certifies as urgent anti-terror bill
Someone from the Philippines can become $356 Million richer this Tuesday
MOST READ
‘If I had not been SolGen, I will make you eat your words,’ Calida tells Coco Martin
5 car dealership outlets shutting down
Duterte certifies as urgent anti-terror bill
Senate OKs bill authorizing president to postpone opening of classes beyond August
Don't miss out on the latest news and information.