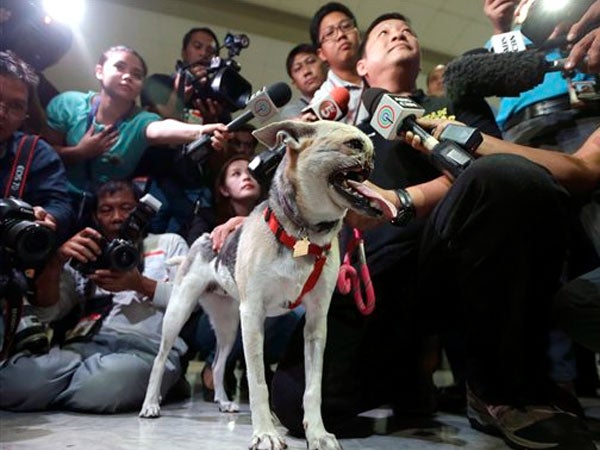 Dr. Anton Lim is interviewed by the media as he holds Kabang, a two-year-old injured mixed breed, upon arrival at the Ninoy Aquino International Airport early Saturday from San Francisco, California. AP

MANILA, Philippines—The Philippine dog that lost half her face saving the lives of two girls returned home Saturday after treatment in the United States.

Filipino veterinarian Anton Lim who accompanied the dog — named Kabang — said the mixed-breed whose snout and upper jaw had been sheared off was treated at the University of California, Davis, veterinary hospital for seven months with $27,000 in donations raised in the Philippines and abroad.

Kabang suffered the injuries in December 2011 when she jumped into the path of a motorcycle, stopping it from running over her owner’s daughter and niece in southern Zamboanga City.

UC Davis veterinary Professor Frank Verstraete said doctors at the hospital performed surgery to heal her wounds, though they could not reconstruct Kabang’s jaw or snout.

Doctors had to first treat her for other ailments, including a tumor and heartworm, to ensure her wounds would heal. They took skin from her cheeks, neck, and forehead to cover up sensitive areas that were exposed on her face during surgery in March, Verstraete said.

Kabang won widespread sympathy because of her injuries from what has been described as a heroic act. A nurse from Buffalo, New York, spearheaded a fund-raising campaign to bring Kabang to the United States because Philippine veterinaries could not treat her.

Lim said donations poured in from 45 countries. “It is very fulfilling that at least our hope in humanity is restored,” he said.

Lim said Kabang has become a symbol of “unconditional love.”

“Now, if you give unconditional love to your dog, of course they will give it back to you. So, she saved two lives so the whole world actually came together to save her, so it is really a very nice symbol for everyone,” he said.

Lim said a parade is planned for Kabang’s Sunday homecoming in Zamboanga.