No special talks to help OFWs losing their jobs in Taiwan 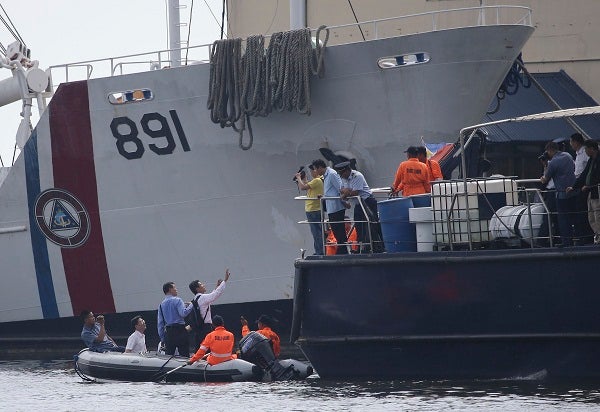 Taiwanese investigators rides a rubber boat as they inspect a ship involved in the alleged shooting of a Taiwanese fisherman while they continue their probe in Manila on Tuesday, May 28, 2013. The daughter of the Taiwanese fisherman allegedly killed by Filipino coast guards filed murder charges during joint proceedings held by Taiwanese and Philippine prosecutors in Pingtung County on Tuesday. AP PHOTO/AARON FAVILA

MANILA, Philippines—There are no special talks to help Filipinos who are losing their jobs in Taiwan after the killing of a Taiwanese fisherman by Filipino coast guards three weeks ago.

Arthur Abiera, Manila Economic and Cultural Office (Meco) representative, told a news conference on Thursday that negotiations with Taiwanese authorities involved general matters for the restoration of good relations between the Philippines and Taiwan.

Labor issues are only part of the talks, he said.

Taiwan froze new jobs for Filipino migrant workers and Taiwanese employers are not renewing contracts in retaliation for the shooting death of fisherman Hung Shih-chen on May 9.

Many of the 87,000 Filipino migrant workers in Taiwan are affected by the retaliatory measure but Abiera said Meco could not do anything about it.

“That’s the Taiwanese government’s decision,” Abiera said. “We are trying to address all issues. It’s sad that they will be affected.”

“Why should we suffer for what other Filipinos had done?” asked Maryanne, a Filipino migrant worker in Taiwan who asked that her last name be withheld.

“What happens to us if our contracts are not renewed?” she said.

Benedict Ray Balondo, a migrant worker from Batangas City, said at least 50 Filipinos were affected by the retaliatory measure in the tools factory in Taichung City where he worked.

Abiera said he understood the migrant workers’ situation but Meco could not go for special negotiations on their behalf.

“We cannot act piecemeal,” he said.

Roy Patoy, a migrant worker from Quezon City, said he believed the freeze on Filipino jobs would not last long.

“Taiwan’s economy will be affected if they will not hire Filipinos,” Patoy said.