Going back to school abroad 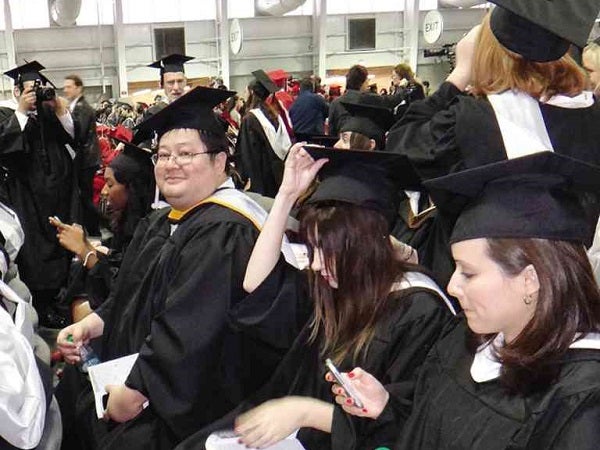 LEVELLING UP The author recently completed his requirements for a Master of Science in International Relations. Contributed photo/The FilAm

When American whiz statistician Nate Silver, who was our commencement speaker, urged the millennials not to stop “being weird,” I felt oddly out of place, coming from Ray Romano’s league of Men of a Certain Age.

It was the kind of raw, gusty and rainy day which made for a miserable go in New York City. My wife and I struggled under one umbrella that couldn’t shield my suit from the rain nor her green dress, but you cannot choose a graduation day. Mine fell on an afternoon that resembled slushy winter more than spring.

We got off at Penn Station and began walking toward the Jacob K. Javitz Convention Center on 11th Avenue and 39th Street where The New School was holding its commencement ceremony. I was a candidate for a degree in Master of Science in International Relations. More than 30 years after getting a bachelor’s degree in mass communication from the Ateneo, I would be marching again.

Sitting on a bench, waiting for us to line up so the 77th commencement of The New School could start, I looked around at faces I did not know. I was surrounded by complete strangers, not by people I had schooled with for four years.

Although we were told to put away our phones after putting on our robes, the students paid no heed. They continued listening to music, texting and taking pictures. I was texting my wife, too, making sure we knew where to meet up in this huge crowd after the ceremony.

The mood was ebullient and the students mostly giddy. For every student graduating that day, there were probably three or four family members cheering them and carrying flowers. None looked happier than the parents who were full of pride at what their children had achieved: Graduating with honors, graduating in New York City (for the foreigner parents), or simply graduating. I saw a lot of Korean families.

The two-hour-long ceremony went by in somewhat of a blur, but two segments stood out.

One was the jazz rendition of “Amazing Grace” on the trumpet with its all too subtle hint of playful mirth by student Linton Hare Smith II of New Orleans. It was fluid and moving. It did not matter that rain was pouring. The music was soothing.

Silver on the screen

The second was the commencement address by Nate Silver, the New York Times statistics geek who called every state correctly between Barack Obama and Mitt Romney in the 2012 election. He lit out against Time Magazine’s Joel Stein for sniping at today’s generation of millennials as “lazy” and “entitled.” He said it was the millennials of an earlier generation who pioneered computer technology and walked on the moon.

“Don’t stop being weird,” Silver urged the graduating students, his message seeming to extol this attitude of nonconformism which The New School’s founding fathers sought to change when faced with the “intellectual timidity” of their time. “Don’t stop being independent.”

It was time for the deans to call each college and present the students as being ready for graduation. Like the Pope giving out his blessing, school President David E. Van Zandt pronounced the students as graduates and newly minted alumni. There was loud and prolonged applause.

The processional was supposed to be an orderly exit, but with the relatives surging toward the graduates for a hug and a photo op, there was no way order would be observed.

Groups of students made their way to the stage to pose with The New School banner in the background. Wanting to wring every possible memory, I started posing for pictures while my wife snapped away.

We walked a good five blocks under the mellow drizzle to Hell’s Kitchen where we celebrated over wine, and a dinner of duck breast and rack of lamb. It was a bittersweet feeling.

Two years ago, it was my wife who graduated from The New School to complete her bachelor’s, and I was there to take her photos. This year, I am the grad student and she was there for me.

The author, a journalist previously based in Manila and Singapore, in now based in New York and is one of the founders and chief analysts of the online philippinecommoditiesdigest.com.