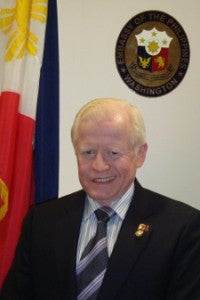 Philippine Ambassador to the US Jose Cuisia Jr. FILE PHOTO

LOS ANGELES—The Philippine Embassy has joined the Filipino-American community in questioning the use of “disproportionate force” in subduing a Filipino-American woman who was fatally shot by police after reportedly creating a disturbance inside a wholesale store in Virginia.

Mylene de Leon Scott, 38, was shot dead on Wednesday (Thursday in Manila) by one of two police officers who responded to a reported disturbance at Costco Wholesale Store in Sterling, Virginia.

In a statement released yesterday (Friday in Manila), Ambassador Jose L. Cuisia Jr. said “we share the concerns” expressed by the family of the victim and the Filipino-American community that police officers “may have responded with disproportionate force.”

Loudoun County Sheriff Mike Chapman told NBC News that at about 3 p.m. Wednesday, the store employees noticed Scott acting strangely after running out of the pizza samples she was handing out.  Witnesses said she became upset and started waving a knife and scissors, threatening employees.

Chapman said that when the police officers arrived to handle the disturbance, Scott approached the officers with the sharp items. One deputy tried to use a stun gun on Scott, but the stun gun “did not work,” and another deputy fatally shot her, he added.

In its statement, the Philippine Embassy offered its condolences to the family of the victim and requested authorities to conduct “a thorough, impartial and expeditious investigation of the incident.”

Cuisia added that the embassy “stands ready to extend its assistance to the family of Ms Scott. We will continue to coordinate with police authorities in Loudoun County to secure more information on this case.”

The embassy, quoting a statement released by the Loudoun County Sheriff’s Office, said Scott reportedly refused to heed repeated orders from the police officers for her to drop the sharp items she was holding.  When she moved toward them, one of the officers used a taser electroshock device in an attempt to immobilize her, but the device reportedly failed.

It was at this point that the police fired multiple shots at Scott who died at the scene.

Scott’s employer, Club Demonstration Services Inc., a Costco subcontractor, also described Scott as “a valued member of the team” and “a respected associate” in a statement.

The National Federation of Filipino American Associations (NaFFAA) and the Washington DC-based Migrant Heritage Commission (MHC) yesterday (Friday in Manila) also called for a thorough investigation of the case and offered assistance to Scott’s family.

NaFFAA spokesperson Bing Branigin said she rushed to the scene of the crime after hearing the news, and was able to talk to a Filipino American couple who were shopping at Costco when the incident occurred.

“It happened so fast,” Branigin quoted them as saying. The couple saw one of the police officers and heard him say “drop it, drop it,” the NaFFAA official said.

Moments later the couple heard successive shots and saw a police officer collapse on the ground, Branigin said. It was learned later that the police officer was wounded in the leg by a ricocheting bullet.  He was later released from the hospital.

Branigin said she received information that Scott was depressed due to family problems. Friends and neighbors were quoted as saying that Scott, who was reportedly from Bulacan, was in a custody dispute with her ex-husband over their two children aged 8 and 12. With a report from Jerome Aning