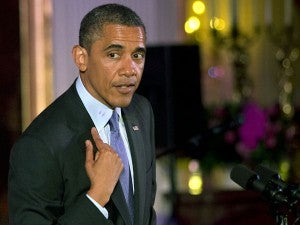 President Barack Obama gestures to lipstick marks on his collar in the East Room of the White House in Washington, Tuesday, May 28, 2013. The aunt of American Idol runner-up Jessica Sanchez kissed the president’s collar and left the lipstick marks just before he gave his remarks at an Asian American and Pacific Islander (AAPI) Heritage Month event. AP

LOS ANGELES—President Barrack Obama on Tuesday (Wednesday in Manila) pointed out what he called “a sign of warmth” from the audience gathered in the East Room of the White House—a lipstick smear on his collar.

He said the culprit was the “aunt” of Filipino-Mexican-American singer Jessica Sanchez.

But Obama was actually referring to Sanchez’s maternal grandmother, Virginia Bugay, who was visiting from her native Bataan and accompanied her granddaughter to a White House celebration of Asian American Pacific Islander Heritage Month.

Sanchez, a runner-up in the reality show American Idol, performed at the White House event.

While the audience waited for Obama to arrive, Virginia stood near the entrance, recounted Bing Branigin, spokesperson of the National Federation of Filipino American Associations (NaFFAA), who attended the event.

When Obama entered the room, Virginia rushed toward Obama and said, “Mr. President I’m a big fan, can I have a hug?” Branigin said.

Virginia gave the much taller Obama a hug–and a kiss, which landed on the right side collar of Obama’s blue shirt.

Before he delivered his remarks, Obama talked about the lipstick smear.

“Jessica–it wasn’t Jessica, it was her aunt, where is she?” Obama said. “Auntie, right there. Look at this,” he said pointing to the red lipstick on his collar. “Look at this. I just want everybody to witness. I do not want to be in trouble with Michelle, that’s why I’m calling you out right in front of everybody.”

In his speech, Obama said the contributions Asian-Americans have made to the US underscore the need to overhaul the nation’s immigration system.

He lauded Asian-Americans and Pacific Islanders for helping build and defend the United States and called for immigration laws that would respect history.

A White House-backed immigration overhaul is working its way through Congress. The bill would remake immigration laws, enhance border security and put the estimated 11 million undocumented immigrants–including at least 1 million Filipinos–on a path to citizenship.

“We value these voices because from the very beginning, ours has been a nation of immigrants; a nation challenged and shaped and pushed ever forward by diverse perspectives and fresh thinking,” said Obama in his remarks. “And in order to keep our edge and stay ahead in the global race, we need to figure out a way to fix our broken immigration system–to welcome that infusion of newness, while still maintaining the enduring strength of our laws. And the service and the leadership of Asian Americans and Pacific Islanders have proved that point time and again.”

A diverse group of artists, authors, and musicians, including Sanchez, spoke or performed, showcasing the many contributions of Asian Americans and Pacific Islanders to the rich artistic traditions of America.