Timor-Leste PM due for official visit 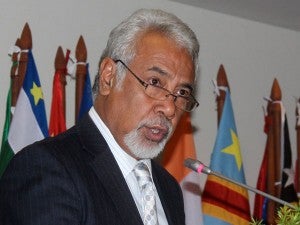 MANILA, Philippines—Timorese Prime Minister Kay Rala Xanana Gusmão is set to fly to Manila next week on his first official visit to the Philippines, the Department of Foreign Affairs (DFA) said Wednesday.

Gusmão, Timor-Leste’s first president after independence from Indonesia in 2002, will be in the Philippines from June 5 to 9 to firm up cooperation on education, trade and investment, infrastructure and defense, DFA spokesman Assistant Secretary Raul Hernandez said Wednesday.

During his five-day stay, Gusmão will deliver a lecture at the University of the Philippines College of Law and visit industrial areas in Subic Bay in Olongapo City and Clark Field in Pampanga to link up with potential investors.

Gusmão is currently serving his second five-year term as prime minister and is concurrently Timor-Leste’s minister for defense and security. He was a leader of the resistance movement that campaigned for Timor-Leste’s independence from Indonesia, which occupied the territory after centuries of Portuguese occupation.

Timor-Leste is currently campaigning to become a member of the Association of Southest Asian Nations, of which the Philippines is a founding member.