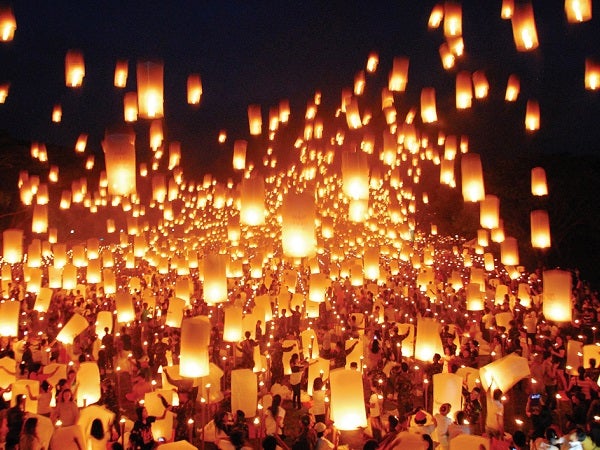 BREAKING THE RECORD Thousands of youths release sky lanterns—15,185 of them—within 10 minutes at the University of the Philippines Visayas campus in Miag-ao in Iloilo City to call for world peace through inner peace. This breaks the Guinness World Record of 12,749 sky lanterns released in a single event, according to organizers. GUIJO DUENAS/INQUIRER VISAYAS

MIAG-AO, ILOILO—Thousands of lanterns brightened the evening sky in this town on Friday as the Philippines lit its way to a Guinness world record for the most number of sky lanterns flown simultaneously.

The event held at the University of the Philippines Visayas here was also a call for “World Peace through Inner Peace” and was organized by Filipino and Thai participants from various religious faiths.

Seyda Subasi-Gemici, adjudicator and official representative of Guinness World Records, said thousands of participants launched 15,185 sky lanterns at the football pitch of UP-Visayas (UPV). This bested the previous record set in June 2012 by Romania at 12,740 lanterns to promote a shopping mall opening.

“I’m happy to announce a new Guinness World Record. You all were officially amazing,” Gemici told the crowd of around 15,000 who broke into cheers and chanted “Philippines! Philippines!”

A certificate from the world record body was awarded to the organizers for the feat.

The event dubbed “Inaugural Light of Peace Event in the Philippines: World Peace through Inner Peace,” was organized by the Middle Way Meditation Institute (MMI)-Philippines and its Thailand-based main organization which promotes meditation.

“We need more than material things. We need a sense of calmness, a sense of direction amid the challenges in our lives,” he told the Inquirer.

He said that similar activities were held in Thailand but the number of lanterns flown was less than 10,000.

He said that world peace would come from “within our hearts, within our own persons.”

The participants mostly came from Miag-ao, other parts of Panay Island and other provinces. They were joined by around 100 MMI partners and volunteers from Thailand.

Participants of all ages and from all walks of life arrived as early as 2:30 p.m. on the 1,200-hectare UPV campus in Miag-ao, about 42 km south of Iloilo City.

The campus was chosen as the venue because of its extensive open space bounded by trees and mountains on one side and the sea on the other.

The event organizers asked for a P350 donation from each participant to cover the cost of the activity and they were given priority passes, but those who did not make a donation were still allowed to join.

The release of the sky lanterns was preceded by a 15-minute guided meditation with the participants sitting on the football pitch.

The participants first lit 10,000 ground lanterns to illuminate the football field. A short orientation video and live demonstration were shown.

The Thai-manufactured sky lanterns were made of rice paper with bamboo frames. They had a diameter of 50 cm and a height of 150 cm, according to Dr. Emiliano Bernardo III, the event organizer.

The participants were instructed to light the lanterns for two minutes and 45 seconds to allow the air inside to heat up before releasing them.

The lanterns were released in three waves within 10 minutes starting at 6:45 p.m. by 5,000 pairs of participants.

The cheers of excitement grew as more of the lanterns were released.

Around 15,687 lanterns were prepared and displayed but some were flown outside the 10-minute limit. Others burned up before they could be released.

Organizers said the environmental impact of the event was “much less than that of fireworks and rubber balloons.”

Bernardo said the lanterns did not use fuel oil but tissue paper dipped in wax. The only metal material was the 1-mm wire used to secure the heat source.