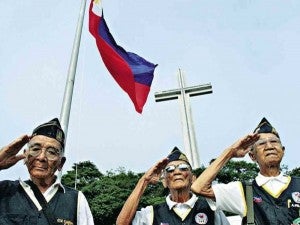 It used to be the victims of the Japanese American internment camps.

Now it’s the Filipino veterans of WWII who provide the penance and cover for politicians and all their sinful ways.

Last week in Washington, D.C., Celestino Almeda, a frail 96, and the spokesperson for the American Coalition for Filipino Veterans, gladly acknowledged and thanked the members of the U.S. Senate Judiciary Committee for passing  an amendment by voice vote that would speed up the immigration process for their families.

Currently, the Filipino WWII veterans who were able to immigrate to the U.S. remain separated from their families. Many of the relatives who wait to be re-united have done so for more than a decade.

The amendment, introduced by Hawaii’s Mazie Hirono, would allow adult children of living or deceased Filipino American WWII veterans to get immediate priority for visas if the bill is approved by the full Congress and signed by the President. The coalition estimates that 20,000 visas could be issued because of the amendment.

That’s great. But it was the lone family reunification amendment out of 11 submitted by Hirono that was voted in by her colleagues on the committee.

And that’s the tragedy of this new effort for comprehensive immigration reform. It’s not quite comprehensive enough.  Family unification, the kind that Teddy Kennedy fought for, no longer is at the heart of the matter.

Now it’s all a about border security, making sure undocumented people don’t get in scott-free for breaking the law.

It’s also more about money ties rather than blood ties.

Your family here? So what?  The visas for siblings and older married children have been eliminated. And Hirono’s amendments to restore them failed.

But industries that need workers get their visas. Facebook and friends, get their stem workers.

Manang Baby and Manong Boy, sorry na lang. We’ll send you a balikbayan box, but not a visa.

The exception? The veteranos, who  have had to fight for the slow drip of benefits from Congress over the years.

Didn’t they win their fight for equity a few years back? Not entirely. There’s still the matter of proving service (not helped when records were lost), as well as a fight over pension benefits for those in the Philippines, and this matter of family re-unification.

Meanwhile, Congress has continued to use the veterans for political purposes. Every time legislators need a “feel good” moment, they slice off a bit of justice owed to the veterans, and then show off about what a good thing they’ve done for these aging warriors.

It was a ready-made ploy for the immigration bill.

In reality, it was all political show biz and a sop to Asian Americans, since both the House and the Senate have already approved similar measures to speed up the visa applications of veterans’ older children.

More than 200 Asian American groups signed an open letter to the committee backing the family unification efforts of Hirono, defining it as a major community issue.

But only the veterans and their families got some good news in time for Memorial Day in the U.S.

The politicians shouldn’t expect us to be happy as they greet us at their holiday events.

Groups will feel the sting of compromise and say they’re “disappointed.” But that’s not enough. The push should continue for an immigration reform policy that’s more humanistic than corporate.

That would be an immigration bill worthy of our community’s total support.