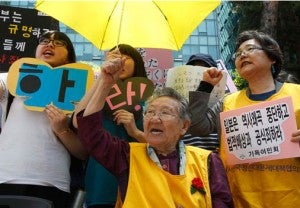 Former South Korean comfort woman Kil Un-ock, center, who was forced to serve for the Japanese troops as a sexual slave during World War II, shouts slogans during a rally against the recent comment of Osaka Mayor Toru Hashimoto in front of Japanese Embassy in Seoul, South Korea, May 15. AP

Supporters of Kim Bok-dong and Kil Won-ok, both in their late 80s, said Friday that the former sex slaves had nothing to talk about because Hashimoto has showed no remorse over his remarks.

Their supporters say they are demanding that he apologize and resign as mayor.

Hashimoto, 43, also angered the US by suggesting American troops based in southern Japan should patronize legal adult entertainment establishments to reduce sex crimes there.