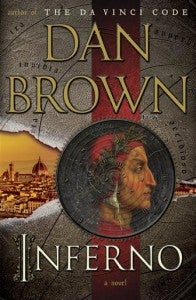 This book cover image released by Doubleday shows “Inferno,” by Dan Brown. The latest book by Brown, the author of “The Davinci Code,” will be released on May 14, 2013. (AP Photo/Doubleday)

MANILA, Philippines— Dan Brown’s description of Manila as “the gates of hell” in the American novelist’s latest book has not gone down well with officials in the Philippine capital.

The book “Inferno,” which is being sold in the Philippines, describes a visitor to the city who is taken aback by poverty, crime and prostitution.

The chairman of metropolitan Manila, Francis Tolentino, wrote an open letter to Brown on Thursday, saying that while “Inferno” is fiction, “we are greatly disappointed by your inaccurate portrayal of our beloved metropolis.”

Tolentino objected to the “gates of hell” description, and to Manila being defined by what he calls terrible descriptions of poverty and pollution.

He said that the novel fails to acknowledge Filipinos’ good character and compassion.

“Truly, our place is an entry to heaven,” Tolentino said. “We hope that this letter enlightens you and may it guide you the next time you cite Manila in any of your works.”

“Inferno” is already a best-seller a little over a week since its debut. The story drawn partly from Dante’s epic again features Harvard symbologist Robert Langdon, the protagonist for Brown’s blockbuster “The Da Vinci Code” and its follow-up “The Lost Symbol.”

“I’ve run through the gates of hell,” she said.

It’s not the first time that authorities have been angered by an unflattering description of the sprawling city of some 12 million people, where urban shanties and the homeless exist side by side with glitzy shopping malls and walled residential compounds.

In 1999, then-President Joseph Estrada banned Hollywood actress Claire Danes, who shot the movie “Brokedown Palace” in Manila, from entering the country after she said in an interview that the city was smelly, weird and full of rats.

Estrada was elected mayor of Manila in last week’s elections on a promise to reverse the city’s decay.

er “The Da Vinci Code” and its follow-up “The Lost Symbol.”