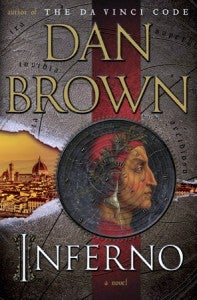 This book cover image released by Doubleday shows “Inferno,” by Dan Brown. The latest book by Brown, the author of “The Davinci Code,” will be released on May 14, 2013. AP

MANILA — Dan Brown’s description of Manila as “the gates of hell” in the American novelist’s latest book has not gone down well with officials in the Philippine capital.

The book “Inferno,” which is being sold in the Philippines, includes a character who is visiting the city and taken aback by poverty, crime and the sex trade.

The chairman of metropolitan Manila, Francis Tolentino, wrote an open letter to Brown on Thursday, saying that while “Inferno” is fiction, “we are greatly disappointed by your inaccurate portrayal of our beloved metropolis.”

Tolentino objects to the “gates of hell” description, and to Manila being defined by what he calls terrible descriptions of poverty and pollution.

He says the novel fails to acknowledge Filipinos’ good character and compassion.