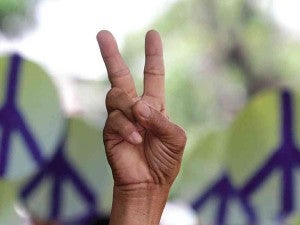 Peace signs dominate the scene as protesters gather in Makati City on Wednesday in front of the Taipei Economic and Cultural Office (Teco), Taiwan’s de facto embassy in the country. They urged the governments of both the Philippines and Taiwan to resolve their diplomatic row and ensure the safety and job security of Filipino workers in Taiwan. NIÑO JESUS ORBETA

MANILA, Philippines—Taipei has approved Manila’s request to send investigators to Taiwan to examine evidence and interview witnesses to the May 9 fatal shooting of a Taiwanese fisherman by Filipino coast guards.

But Justice Secretary Leila de Lima on Wednesday declined to tell reporters when a team from the National Bureau of Investigation would leave for Taiwan.

“It will be very soon but we don’t want to announce the exact date and the exact time because the NBI [does] not want to be bothered by [journalists],” De Lima said.

“How can they do their work if [reporters tag] along?” she added.

The NBI is about to conclude its investigation into the killing of 65-year-old Taiwanese fisherman Hung Shih-chen, needing only information from Taiwan to wrap up the job.

Taiwan and the Philippines on Monday agreed to cooperate in the investigation of the fatal shooting of Hung by Filipino coast guards.

The agreement has led to an easing of cross-channel tensions, including calls from Taiwanese officials themselves to protect Filipinos on the island who have been targeted for attacks and harassment by Taiwanese angry over the killing of Hung.

President Aquino, whose formal apology had been rejected by the Taiwanese government, last week called for calm and protection for the 87,000 Filipinos working in Taiwan amid reports that three Philippine nationals on the island had been hurt in attacks by angry Taiwanese.

Amadeo R. Perez, chairman of the Manila Economic and Cultural Office (Meco) in Taipei, reported to Malacañang on Wednesday the Taiwanese officials’ “positive response” to the President’s call for protection for Filipinos in Taiwan.

“This was received well by the Taiwanese side, and they said that they will ensure that no harm will come to our citizens there. That’s good news,” deputy presidential spokesperson Abigail Valte said at a news briefing in the Palace on Wednesday.

“Based on what we’ve seen so far, [tensions are] easing a bit,” she added.

The Philippine National Police on Wednesday said Taiwanese tourists in the country need not worry about their security despite reports of attacks on Filipinos in Taiwan.

“While we protect our own citizens, we also protect foreigners visiting the country, including Taiwanese tourists,” said Chief Supt. Generoso Cerbo, PNP spokesperson.

Cerbo said the police had received no reports of Taiwanese being harassed here in retaliation for the harassment of Filipinos in Taiwan.

On Monday, the Taipei Economic and Cultural Office (Teco) in Manila reported that a Filipino migrant worker who had been hit with a baseball bat in an attack by furious teenagers last week settled with his attackers and received P164,000 in compensation.

Despite the easing of public anger, Filipino migrant workers on the island still avoid the streets.

Sheila Mayandia, a migrant worker from Iloilo, said that on the advice of her employer, she identified herself as Indonesian whenever she was asked about her nationality.

“I have to be careful because I’m the only Filipino in this neighborhood,” Mayandia, who works as a house caretaker in Taipei, told the Inquirer by phone.

Sheila Borola of Tacloban City told the Inquirer that her husband, Richard, who works at a tire factory in Taipei, rides a company vehicle going to and returning from work to stay safe.

Meco labor attaché Reydaluz Conferido said that contrary to reports, only three Filipinos had been attacked in Taiwan, with De Leon suffering the worst injury.

Conferido, who leads a team conducting a “dorm-to-dorm” briefing for Filipino migrant workers on the situation, confirmed that De Leon settled with his attackers. He said no case had been filed in the Taiwan Council on Labor Affairs.

Most Filipinos interviewed by the Inquirer asked not to be identified.

“Nothing has happened to us yet, but we are afraid because, you know, you’re walking on the street then somebody pulls your hair,” said a female migrant worker.

A male migrant worker said Taiwanese at his work site used to be friendly to Filipinos there, but they changed after the fatal shooting of Hung.

“They always smiled and greeted us before. But now we can feel they are angry,” he said.

Some Filipinos refused to be pushed around.

A Filipino woman who is married to a Taiwanese said a neighbor demanded that she apologize to her for the killing of Hung.

“I refused. I told her I would not apologize to her because I did nothing wrong to her,” she said.

Conferido said an Indonesian crew member of Hung’s boat, the Guan Ta Hsin 28, could shed light on the May 9 incident, which happened off Balintang Island in northern Philippines.

“We are looking for a neutral source who could say what really happened on that day, and we have been informed that one of those on board was an Indonesian national,” Conferido said.

Meco is looking for the Indonesian, he said.

Eric Chiang of the Taiwan Ministry of Foreign Affairs told the Inquirer that the boat’s crew members are “not in police protective custody.”

“They are in Pintung and not in any sort of protective custody,” Chiang said.

“We have no control over them, but if they want to, they can be interviewed to say what happened on that day,” he said.

The NBI team will interview the fishermen.

In addition, the team wants to do a new autopsy to determine how Hung died, but De Lima said this might need the consent from the fisherman’s family.

The coast guards involved in the shooting claimed the incident happened in Philippine waters, but Taiwan insists it happened in its territory.

Former Navy officer Rex Robles told a news forum in San Juan City on Wednesday that the government under President Cory Aquino signed an agreement with Taiwan giving a “safety corridor” to Taiwanese ships passing through “Babuyan, Balintang channel all the way to the Pacific Ocean.”

The fact that Taiwan signed the agreement shows that Taipei recognizes those waters as Philippine territory, Robles said.

“There are papers there,” he said, referring to Malacañang.

So far, he added, no one in the Palace has “bothered to raise the agreement to the Taiwanese.”

“He says not what he himself believes, but what his advisers tell him to say,” Robles said.

He described Aquino as a “pushover” for his soft stance in the current diplomatic row with Taiwan.

“One flick of the finger and he’s down,” Robles said in Filipino, adding that he is giving the administration “3-4” out of 10 in its dealings with Taiwan.—With reports from TJ Burgonio, Marlon Ramos, Kristine Felisse Mangunay, Jhesset Enano and Mariejo Ramos in Manila; and  Nestor P. Burgos and Joey Gabieta, Inquirer Visayas