Notes of a Fil-Am election observer 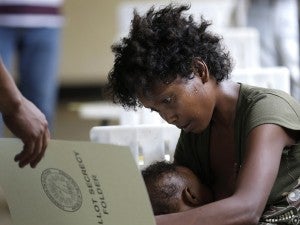 Sweat flows down the cheeks of Belinda Sibal, an indigenous Filipino living around the slopes of Mount Pinatubo volcano known as Aetas, as she votes in the country’s midterm election at a polling precinct in a remote village of Zambales province, about 250 kilometers (160 miles) northwest of Manila, Philippines Monday, May 13, 2013. More than 50 million Filipinos are expected to troop to polling centers to elect senators, congressmen and down to municipal mayors for the country’s midterm elections. AP/Bullit Marquez

MANILA–When Fil-Ams come back to the Philippines, it’s usual for us to stay with relatives, visit tourist sites (Baguio City or the beaches) and indulge in the delicious cuisine. But seldom do we engage in the political process. A college student in the Seattle, Washington area, I came this year as an International observer for the 2013 mid-term elections, via Compact-IOM. I found myself witness to a lively aspect of Filipino culture that is a space for both struggle and celebration.

As one of 30 international observers, four of us from the U.S., I was asked to document any instances of political violence and intimidation, vote buying and various illegal practices as well as the general voting process. I observed both matters of concern and harbingers of promise. Here are some of my general conclusions.

Vote buying is a continuing “part of the [electoral] game,” as was widely acknowledged by local politicians and voters alike. But we met and observed reformist politicians, many of whom were encouraged by President Benigno Aquino’s reformist policies, who opposed vote buying and in some cases won because they opposed it.

In various regions, violence and intimidation continue to be used as tools of electoral politics, but in contrast to data from the 2007 and 2010 election cycles we observed a notable decrease in election-related violence and intimidation. Still, the very nature of electoral violence distorts the process or distracts people’s attention from competing political promises and agendas. We saw how violence continues to undermine the rights of voting Filipinos.

Overall, the tenacity of Filipinos to practice their democratic right is commendable. From what we observed, the Board of Election Inspectors, election volunteers, provincial Philippine National Police personnel, Comelec staff and the military worked diligently to make this year’s elections possible.

In comparison, in the face of political dynasties, vote buying, violence, intimidation, stifling heat, and long queues a greater percentage of Filipinos continually come out to participate in the democratic process of midterm elections than in the US.