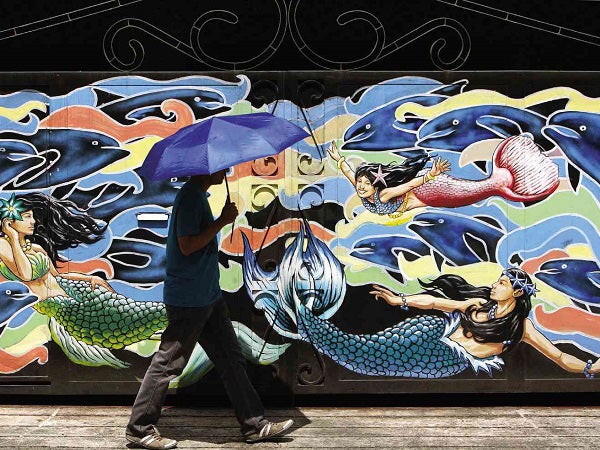 OCEAN DEEP. A man walks past a mural depicting a fantasy world of mermaids and dolphins along Matahimik Street in Sikatuna Village, Quezon City. The country observes the Month of the Ocean this May. MARIANNE BERMUDEZ

Economic losses from disasters worldwide have gotten “out of control,” totalling $2.5 trillion in the past decade, which is more than 50 percent over previous United Nations (UN) estimates, according to UN Secretary General Ban Ki-moon’s special representative for disaster risk reduction.

In a statement, a copy of which was furnished the Inquirer, Margareta Wahlstrom reported that “a review of new data by the UN Office for Disaster Risk Reduction indicates that direct economic losses from disasters so far this century are 50 percent higher than previous estimates.”

“They are in the range of $2.5 trillion,” said the Geneva-based UN official, citing the UN’s Third Global Assessment Report on Disaster Risk Reduction.

Wahlstrom said that in Japan, the multinational automaker Toyota lost $1.2 billion in  revenue after the 2011 earthquake.

“(Toyota car) parts shortages in the United States caused 150,000 fewer vehicles to be manufactured. Production in India and China dropped 70 percent and 50 percent, respectively,” she said.

The UN official also said a UN study of some 1,300 small and medium enterprises in the Americas found that only 14.2 percent of companies with fewer than 100 employees had a business community plan or crisis management program. Approximately 25 percent of businesses “close their doors after a catastrophic event.”

“This disturbing reality is not surprising given the overall lack of attention paid to disaster risk management in business schools and by economic analysts and forecasters. Currently, insurance pricing does not reflect risk levels or provide an adequate incentive for risk sensitive business investment,” she pointed out.

But there’s good news, according to Wahlstrom.

“Encouragingly, there is growing evidence that businesses, particularly global corporations, are starting to pay more attention to disaster losses and to strengthen risk management in this regard,” she said.

A case in point, she said, is New Zealand where “the business case for stronger disaster risk management—rather than simply business continuity planning—is compelling.”

“New Zealand electricity networker Orion invested $6 million in seismic protection measures that saved the company $65 million in the wake of the 2010 and 2011 killer earthquakes in Christchurch,” she  said.

The UN official also reported that “the market for climate change adaptation is estimated at $100 billion a year until 2050, a huge opportunity for business.”

“The green building sector, quake resistant construction and crop insurance products are all examples of emerging markets,” she said.

Over the coming years, “trillions of dollars in new business investment are set to pour into hazard-exposed regions of the world.”

“How the private sector, which accounts for up to 85 percent of this total investment, decides to allocate these funds will largely determine whether economic losses from disasters will continue to escalate. It will also have a considerable bearing on whether or not we can save lives, jobs and property, and reduce the number of people affected by disasters which currently average over 200 million a year,” said Wahlstrom.

Next week, the UN is holding the Fourth Global Platform for Disaster Risk Reduction in Geneva, where some 3,000 delegates, including the Inquirer, will be tasked to come up with a “revised international framework for disaster risk reduction where the private sector will be put at the center of global efforts to mitigate and prepare for the shocks and crises in the coming century.”

Wahlstrom visited the country in early 2012 when she commended the Philippine government and Church and civil society groups for their “very good and prompt response” to the flash floods that devastated parts of northern Mindanao.

She also praised the nongovernment organizations’ plan of action for the survivors of the disaster that left more than 1,200 people dead and many others injured and missing.

She also cited the NGOs for being an “example of self-organizing communities working with local governments,” noting that “clearly, you have done very impressive work.”

Wahlstrom visited the flood-hit areas in the cities of Cagayan de Oro and Iligan and met with local officials to discuss ways to improve the resilience of their communities to similar disasters in the future.

She also called for increased government funding for disaster risk reduction and the establishment of a comprehensive land use policy to better protect communities against increasing and more climate-related hazards.