MANILA, Philippines — Sixteen Taiwan-based exhibitors pulled out of the 9th International Food Expo (IFEX) in Pasay City on Thursday amid bilateral tension between the Philippines and Taiwan over the death of a fisherman. 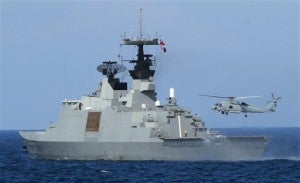 An S70-C helicopter takes off from the stern of a Taiwanese Lafayette frigate during exercises off the southern city of Kaohsiung,Taiwan Thursday, May 16, 2013. Taiwan staged a previously scheduled military exercise in the Bashi Strait Thursday, after the United States on Wednesday expressed concern about increasing tensions between the Philippines and Taiwan, following the shooting of a Taiwanese fisherman by Philippines coast guard personnel. (AP Photo/Wally Santana)

Just as buyers from big-name retail and food service firms such as Harrods of the UK and Sysco Corp. of the US participated in the Philippines’ premier food and ingredients trade show, only a few packages of Taipei-made mochi (glutinous rice cakes with sweet filling), canned food, noodles, and flavorings were on the shelves at the Taiwan booth as of the trade show opening on Thursday morning and were already being placed back into boxes as of this writing.

Expositions and Missions (CITEM). “We were advised but it was too late to take out the booth,” Domingo said. “We cannot blame the exhibitors because the timing of the trade show just happened to be close to when bilateral tensions broke out. However, when things cool down and they still want to do business with the Philippines, they are still welcome.”

Agriculture Secretary Proceso J. Alcala said the pull-out was unfortunate but said Taiwan business people would still be welcome to trade with the Philippines later upon the cooling of issues. “Bilateral tensions take place but we hope it does not escalate and we are optimistic that things can be smoothed out eventually. We would appreciate if both sides do not make the issue bigger because both sides will feel the effects.”

The Taiwan External Trade Development Council (TAITRA), which facilitated the exhibitors’ participation, called exhibitors Wednesday night ordering the pullout, according to volunteers packing up at the Taiwan booth at IFEX. The volunteers, who asked to be left anonymous for lack of authority to speak on behalf of the Taiwan government, said the exhibitors had already paid for their space and had their goods ready for display.

Representatives from the 16 exhibitors — the largest of which was Royal Family Food Co. Ltd., are set to leave Manila on Thursday night, according to the volunteers.

ADVERTISEMENT
Read Next
De Lima to Taiwan probers: Hold it, you can’t just come over to Manila
EDITORS' PICK
IATF to LGUs: Issue ordinances vs attacks on frontliners, COVID-19 patients
Nograles: Cabinet members to donate 75% of monthly salary to aid COVID-19 fight
Diokno to Duterte: OK to make fun of buck tooth, but focus on people’s needs first
10 Filipinos positive for COVID-19 in UK, 7 in Ireland — envoy
Quick chat with Nicole Andersson: ‘You really don’t need much to be happy’
Robredo spox thanks Duterte for defending VP’s efforts vs COVID-19
MOST READ
Gov’t mulling quarantine period extension of 15-20 more days
Sotto on Isko Moreno’s call: We do our job without the media following our every move
ADB warns PH against prolonged lockdown
Duterte fires PACC’s Luna for urging NBI to probe Robredo
Don't miss out on the latest news and information.