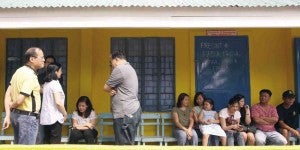 President Aquino, accompanied by two of his sisters, waits for his turn—for 30 minutes—to vote at Precinct 175A at Central Azucarera de Tarlac Elementary School in Tarlac City on Monday. Aquino said he voted 12-0 for the administration’s Team PNoy Senate slate. With him are his sisters Ballsy and Pinky (2nd and 3rd from left) and brother-in-law Manuel Abellada. MALACAÑANG PHOTO BUREAU

“Based on the six areas we monitored, the elections were conducted in a relatively fair and orderly manner,” said Arnold Tarrobago, national coordinator of Compact for Peaceful and Democratic Elections (Compact), which organized the 2013 International Observers’ Mission.

“Nevertheless, the problems we saw and documented unless properly addressed by concerned government agencies and stakeholders will undermine an electoral process reasonably credible by international standards,” he said.

“One common but extremely disturbing issue our foreign observers witnessed concerned the voting public’s right to ballot secrecy,” Tarrobago said in a statement.

“In many polling precincts, there was a deficiency of ballot secrecy folders. Voters were also inserting their ballots to the PCOS machines without any attempt at concealment or advice from election officers to conceal their votes,” Tarrobago said.

He explained that the aim of ballot secrecy was to guarantee that the public voted free from intimidation and bribery.

“It also ensures that political views are not known to any other entity. It is practically universal in modern electoral processes. That this important aspect is wantonly disregarded both by the voters and election officers in our country is a major cause of concern raised by election observers which they believed undermines political privacy,” he said.

Compact said long queues were also observed in several areas. The group said the voting process became difficult in some areas due to problematic voters’ lists and clustering of precincts.

“The observers monitored that some polling precincts in Naga City were too small and could only accommodate eight to 10 seats, resulting in long lines and dampened the mood of some voters to cast their votes. The same observation was seen in Cebu where voters were asked to wait in line for two to three hours to cast a vote that takes about 10 minutes,” Tarrobago said.

“In Pampanga, one PCOS machine printed no text during zero sum printing. Others just failed to function as expected. Unsealed PCOS machines were also found in polling precincts in Cagayan and Pampanga,” he said.

“Although they did not personally or directly witness vote-buying, majority of those interviewed openly admitted that vote-buying is happening, including paying people not to cast their votes in the areas controlled by the incumbent candidates and political clans,” according to Tarrobago.

He said in Masbate, there were reported incidents of voters being paid not to cast their votes or for them not to vote for the opponents of the incumbent.

In the Autonomous Region in Muslim Mindanao (ARMM), the presence of minors casting their votes was also noted, Tarrobago added.

Compact added the high presence of police and military in the areas particularly in Masbate and ARMM, which were known election hot spots. The group said while it lessened election-related violence, it failed to address the climate of fear in the voting areas.

The observers from 30 countries divided themselves into six groups and went to Pampanga, Cagayan, Camarines Sur, Masbate, Cebu and the ARMM. They are expected to be back in Manila for a two-day report-writing workshop to share their observations and recommendations.