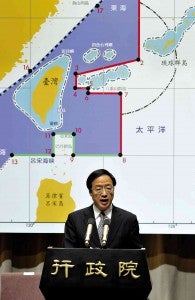 ISLAND ON FIRE Taiwanese Premier Jiang Yi-huah speaks during a press conference in Taipei on Wednesday where he announced Taiwan would recall its representative and discourage travel to the Philippines. AP

MANILA, Philippines—President Aquino on Wednesday formally apologized to Taiwan for the killing of a Taiwanese fisherman by Filipino Coast Guards in disputed waters off Batanes last Thursday.

Aquino also ordered the National Bureau of Investigation to look into the killing of fisherman Hung Shi-cheng, 65, whose boat had strayed into Philippine waters.

Aquino asked Manila Economic and Cultural Office (Meco) Chairman Amadeo Perez to convey his and “the Filipino people’s deep regret and apology” to the family of Hung “as well as to the people of Taiwan over the unfortunate and unintended loss of life,” presidential spokesman Edwin Lacierda told reporters in Malacañang.

The Philippine apology came hours after Taiwanese President Ma Ying-jeou froze the hiring of Filipino migrant workers to express “strong dissatisfaction” over the Aquino administration’s handling of the killing of Hung.

“If the Philippine government cannot satisfy our side’s four demands by 6 p.m. today (Wednesday), our government will adopt a second wave of sanctions,” said Lee Chia-fei, a spokesperson for the Taiwanese government.

The Taiwanese government also said it would conduct naval drills in waters near the Philippines if Manila did not formally apologize for Hung’s death.

Antonio Basilio, the Philippines’ de facto ambassador to Taipei, returned to Manila on Tuesday to explain the Taiwanese position to President Aquino.

Lacierda declined to disclose the contents of the President’s letter,  just saying that “as far as the Philippine government is concerned, we have expressed (deep regret). Our statement has been very emphatic with respect to our deep regret over the incident, and this is also an apology to the family of Mr. Hung Shi-chen.”

He said Aquino himself made the decision to apologize to Taiwan.

No decision has been made yet on the demand for compensation for Hung’s family, he said.

Lacierda said Aquino had ordered the NBI to conduct an impartial investigation.

“Upon orders from the President, the National Bureau of Investigation has already started the investigation and is committed to a thorough, exhaustive, impartial and expeditious investigation of the incident. The NBI has given this case the highest priority,” Lacierda said.

The Philippine Coast Guard and the Department of Foreign Affairs (DFA) have started investigating the shooting, which happened in waters 80 kilometers off Batanes province last Thursday.

Eleven Coast Guards and two Bureau of Fisheries and Aquatic Resources (BFAR) employees involved in the incident have been relieved.

The circumstances surrounding the shooting have yet to be established, although the Coast Guard claimed that the incident was triggered by the Taiwanese fishermen themselves when one of their fishing boats tried to ram a Coast Guard vessel, which was jointly operated with the BFAR.

The DFA remains mum on the shooting and investigation. DFA spokesman Raul Hernandez told reporters on Wednesday that there was “no update” on the steps being taken by the government to deal with new tensions with Taiwan over the killing of Hung.

Justice Secretary Leila de Lima said the NBI would “determine what really happened” and “whether anyone should be held accountable for the death of the Taiwanese fisherman.”

NBI Director Nonnatus Rojas said a team of agents would leave for Taipei “immediately” to talk to the crew of Hung’s boat, the Guang Ta Shin 28, and inspect the vessel.

The investigation in Taiwan is necessary to determine the circumstances surrounding the incident, Rojas said.

The NBI would finish the investigation as fast as it could, he added.

Lacierda renewed Aquino’s call for calm amid deepening outrage in Taiwan over the killing of Hung.

He said the government was looking into reports that Filipino workers in Taiwan were being maltreated following the incident.

Asked if the Aquino administration was forced to issue a formal apology because of the ultimatum issued by Taiwan, Lacierda said, “This is a recognition of our actions toward what we feel is a prudent decision on our part.”

He hoped that the apology would be enough to hold off the sanctions that Taiwan had threatened to impose, including a freeze on hiring Filipino migrant workers.

“We certainly would hope that the authorities in Taiwan would see this gesture as sincere. As we have seen over the news, they claimed that this is insincere. Far from being insincere, we have time and again expressed our deep regrets and apology to the family of Mr. Hung Shi-chen,” he said.

Lacierda said the government had received information on the freezing of new jobs.

He said Perez would “discuss the matter with the appropriate authorities in Taiwan.”

“We will certainly hope that they will revisit their decision. But, nonetheless, we are preparing for the contingencies,” he added.

There are about 42,000 Filipino migrant workers in Taiwan, according to the Philippine Overseas Employment Administration (POEA).

Labor Secretary Rosalinda Baldoz said the government had not yet received any reports of Filipinos losing their jobs in Taiwan.

“None so far. But if there are cases, they will be handled first by the Manila Economic and Cultural Office,” Baldoz said.

She said earlier that the government was looking for alternative markets, including South Korea and the Middle East, for Filipino migrant workers who would be affected by the new tensions between the Philippines and Taiwan.—With reports from Nancy Carvajal, Christine O. Avendaño, Tarra Quismundo, Tina G. Santos and AFP